Who's excited for the #LIGHTtheWORLD campaign?!!!! Hanging out with some fellow LDS influencers getting a sneak peek at the new Christmas campaign. #lds #thechurchofjesuschristoflatterdaysaints #mormon #ldssmile #christmas #christ #bonconf

Last night we attended the “Light the World” influencer event where the church presented their new Christmas campaign for 2018. It was a great night meeting with lots of social media influencers like Youtubers, bloggers, podcasters, and other social mediaers (I know, I completely made up that last word).

The main theme from last night’s meeting is that the church will be focusing less on “how to serve” and more on “whom to serve”. Who are the individuals that we can serve during the Christmas season. Last year they had the 25 ways in 25 days campaign. While effective and a great experience for many individuals, for others it was a bit overwhelming. So this year, they are switching it up to weekly themes focusing on who should we serve. The Church has created four separate videos that touch each of the themes pictured below.

Remember last year it was 25 ways in 25 days?? It’s going to be new this year with 4 main themes that change each week!! We are so excited!! #LightTheWorld pic.twitter.com/abVRgEXAjV

The four weekly themes are:

Focus on ways you can serve those in need globally

Find ways you can reach out and serve your community

Show love to those closest to you

Increase your own faith in Jesus Christ.

We will be updating this article as

“Giving Machines” are coming back!

During last year’s campaign, individuals were able to go to the Joseph Smith Memorial Building and donate items for others through a vending machine. On the machine it read “What if people could give to someone in need instead of buying something for themselves?” “Freely ye have received, freely give,” a passage from Matthew 10:8, comes on the screen as the brief video concludes.

The vending machine raised over $550,000 in donations last year so they are bringing them back and bringing them to more locations. They will be placing these machines at the following locations: 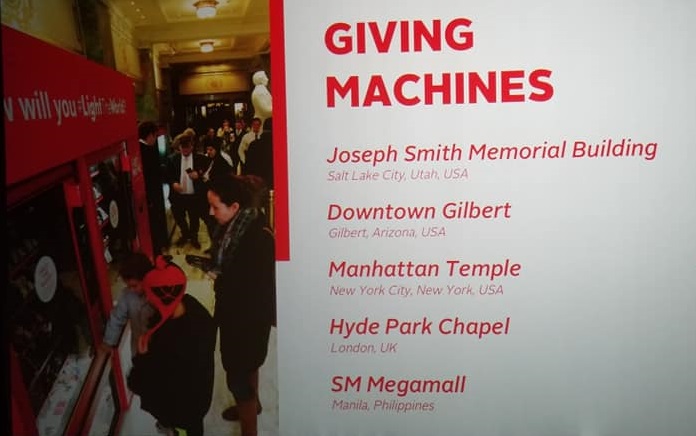 Another announcement during the event was that the church will be having a special Sacrament Meeting on Sunday, December 23rd. More details about this announcement will be coming to ward councils and ward leaders throughout the church but in essence, Invitation Sunday will be a worldwide effort to invite those not of our faith to a specially prepared sacrament meeting to remember the birth of Jesus Christ. We will update this as we receive more information around this. 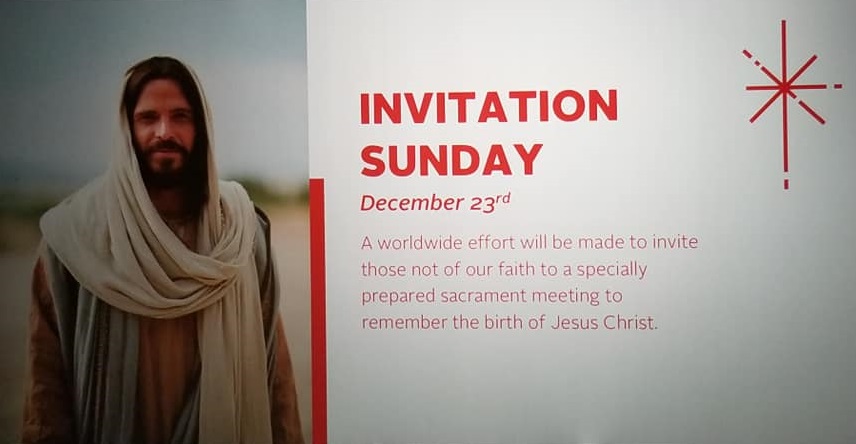 We are super excited to be helping out with the #LIGHTtheWORLD campaign and hope that everyone else is just as excited as we are to particpate and really start to think of not only how could we serve but specifically, who should we be serving. Here are some of the photos from last night’s event from other influencers who attended.

#LightTheWorld We can all do little things that make a HUGE difference! A smile, a hello, a nice word to a neighbor or sibling. There are endless ways to #LightTheWorld. ❤️?

So… The biggest highlight of my day could be that my team at @boncomslc was able to be involved in the first #LightTheWorld meet up for 2018 in #SLC. 220+ attended. That was an awesome highlight for sure. It could also be the fact we screened @janeandemmamovie for this capacity crowd. That was also a huge highlight. But the biggest highlight? Well, that was the fact I got to work side-by-side with @formerlyphread at this event, watching her smile, laugh, network, renew and create new friendships, hold my hand, support me during a mini crisis that occurred mid-event that blessedly resolved peacefully, and held printer’s personal copies of the first editions of the Book of Mormon from early Church periods: New York, Kirtland, and Nauvoo! Thanks @johnhajicek! Joseph Smith actually owned the Nauvoo edition (and was the printer). And yes—we touched them!! I ❤️ you Jenny Dye!

Who is excited to #LightTheWorld this Christmas??? I am! Also excited to watch a screening of Jane and Emma tonight. #bonconf #JaneAndEmma

#LightTheWorld with #bonconf So excited!?

So excited for a girls night with my beautiful friends. ❤️ Can’t wait to her more about #lighttheworld and #emmaandjane #bonconf

So excited to be at #LighttheWorld Initiative influencer meetup! You know what that means…. the holidays are just around the corner! #giveashegave #bonconf We will be seeing the premier of #janeandemma

Having an enjoyable time at the #Bonconf influencer event to talk about #LightTheWorld this holiday season. So amazing to encourage others to light the world and do some good in this world. Be sure to check out my friends accounts. They share wonderful things on their accounts. And they are joining in on the Light the World campaign too. @makinglifeblissful @mrsladywordsmith @meg.seethehappy @saltldsretreat #ldsblogger #ldsbloggers #imamormon #mormon

One of my favorite nights of the year! #bonconf – I’m currently hanging out with some of the coolest people ever learning about the #lighttheworld Christmas campaign. I’m sure you’ll see more about this in the near future. The church will be providing us with new, simplified ideas to help us serve others and build our faith in Jesus Christ. I love #Christmas, it’s the best time of the year!

‪Sharing ways to #LightTheWorld this holiday season. There are so many amazing things coming up and ways that we can show love to each other. Learn more Lighttheworld.org. We ALSO got to preview the new movie Jane and Emma that comes out Oct 12!! …………………………………………. It’s a beautiful story of Jane, a black lds woman who walks hundreds of miles to meet Joseph Smith, a revered cleric who inspires people in the Deep South. When Smith lands in trouble with local hooligans, Jane offers comfort and companionship to his wife in her darkest hour. It’s a must see!! @shesinherapron @mymommystyle thank you for hanging out with us!! We adore you. #momlifecrisis #janeandemma #bonconf #lds #ldsyoutubers

The #lighttheworld vending giving machines are such a wonderful way to get your family excited about sharing our many blessings with others in need! Last year these machines help raise over $500,000 for our brothers and sisters in need.♥️ I'm so excited to share that this year there will be FIVE machines, spanning the globe, and helping your family light the world! ? ⠀⠀⠀⠀⠀⠀⠀⠀⠀ #lighttheworld #bonconf #payitforward #loveoneanother

Feeling soo happy I made it to town in time to be at the #lighttheworld influencer event tonight with #bonconf Great time to start thinking of ways I can light the world this upcoming holiday season. And! See a sneak peek of the #janeandemma movie ?

One of my favorite nights of the year! Kicking off #LightTheWorld with #bonconf. Friends – there is so much good we can do in the world, in our communities, and in our homes. It’s wonderful to serve all year round, but especially more so during the holiday season. Keep watch at lighttheworld.org for more goodness! #sharegoodness #bethegood #justserve #practicewhatyoupreach #practicewhatyoupost #service #randomactsofkindness

The Yawi Family, all in one row!! Not sure how we got everyone to sit still!! Name them all from left to right!! GO!! #lighttheworld #JaneAndEmma #bonconf

Me and my origami hanging out at #bonconf for the #LightTheWorld kickoff.. Best part learning there will be multiple locations of the Giving Vending Machines! (See locations in the gallery of pics)…now we just have to wait for them to be available to visit. Do you think AZ or UT will raise more money? UT raised $500k last year. Bring. It. On.

Getting excited about the #Lighttheworld campaign kicking off December 1st. Getting a sneak peak of the holiday season is awesome and getting me in the spirit of Christmas! . . . #bonconf #janeandemma #Doodlecraft

Tonighg I am at the #LightTheWorld influencer meet-up. It’s going to be so amazing this year my friends! So simple + so beautiful. #boncom #bonconf #influencer