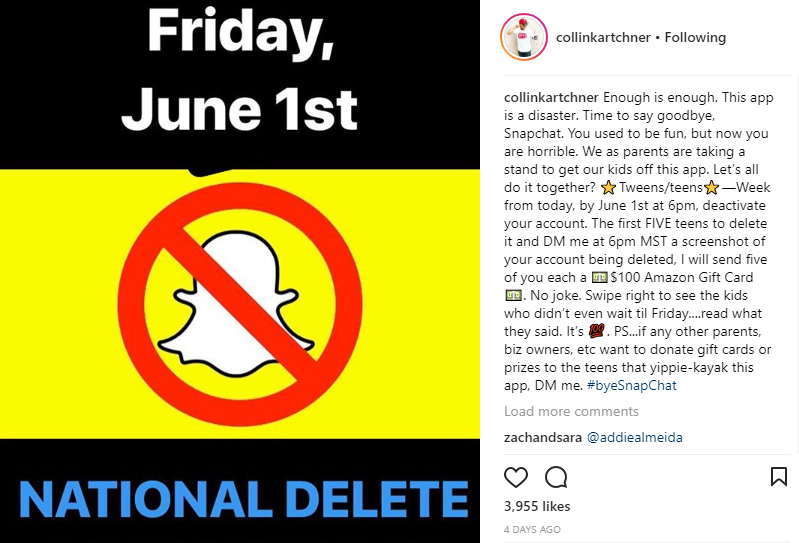 As Colin told LDS S.M.I.L.E. when we asked him about the campaign:

“As I travel around the state in the country talking to junior high and high school kids at assemblies about the negative effects of social media on their self-esteem and self worth, I’m constantly talking to kids about Snapchat and hearing from them how this is what sucking their life and their self-esteem away.

Snapchat is an app that was created for one reason, and that is to send naked photos to one another. They put the cutesy filters on them to make it feel like it’s a family friendly app, but let’s not forget why it was  made in the first place.
Even the local junior high where my oldest will go next year had a story done there where in eighth grade teacher asked 90 students to fill in the blank “one thing my parents don’t know about social media is_____” And the answers were horrifying. Almost all of them said that at least once or twice a week they see nude photos they’re asked to send nude photos whether they want to see them or not their shared amongst classmates all on Snapchat.
And then my Snapchat announced they were going to do this Cosmo after dark upgrade where Fridays at 6 PM they were basically going to have free access to porn, enough is enough
Snapchat has now after our collective out rage has decided to not go forward with this free porn for everyone Friday, but it has been grains into our brains that they the founders of Snapchat do not care one iota about the mental emotional and psychological health of our most vulnerable ages
So I took initiative and said let’s make June 1 national delete Snapchat day because if we do it together no kid is going to feel left out all of his friends do it with him.
I get dozens and dozens of messages a day from junior high and high school kid saying that they and their friends have all decided to delete Snapchat and literally within hours tell me they feel like life is already so much better. Teenagers tell me it feels like a weight has been lifted off their shoulders. And I do my best to share all those stories from real kids on my Instagram account so others can see it and want to join the movement
15 years ago if you wanted to see pornographic images you have to find the creepiest kid in the neighborhood with the creepiest dad go to their house and find a stack of Playboys hidden under their bed. Today parents are putting easy access to porn in their child’s pocket 24 seven. And no matter how much you think you can restrict or control or monitor, Snapchat is 100% impossible to actually monitor with any monitoring app on the market
So to combat the adversary, who pretty much is had been on vacation for a few years, he just sits and waits for mom and dad to hand their kid a smart phone and then let’s that device ruin their soul, I launch this day to hopefully inspire some of our youth and parents to see that this app for what it’s worth, and move on.”
After the initial launch of “Cosmo After Dark”, Cosmopolitan has discontinued its controversial series.

A Snapchat spokeswoman told McClatchy the decision to end the series in the wake of the avalanche of complaints was made by Cosmo.

“We strive to be a responsible source of news, entertainment and information for our community, and understand the legitimate concerns parents have about what content their children consume,” Rachel Racusen, Snap’s director of communications, said in a statement. “From the start, Cosmo’s After Dark edition was age gated from Snapchatters under 18 and only intended for adults. Cosmo has decided to discontinue publishing any future versions of Cosmo After Dark on Snapchat, and we appreciate all the feedback we have heard from parents and members of our community about this content.”

Bray Hallman, a Utah teen from Draper Utah, recently recorded a video with his younger brother about the campaign and his struggle with pornography. He discusses that one of the biggest ways he found or used pornography was through the app Snapchat.