“Born with a perfect memory, Lady Elizabeth Beckett has become one of the world’s most notorious spies, despite being the daughter of a duke. She is shielded only by her code name: Shadow. When young ladies of High Society begin disappearing from London, Eliza has no doubt who is orchestrating these crimes; a heinous man she has been investigating for years. Vowing to save them before they are sold to the highest bidder, she must risk everything to stop him.

Lord Sinclair was perfectly content being the second son of a marquess, but when his brother is murdered, he is thrust into a position he has not been prepared for and does not desire. As an agent for the Crown, he is expected to retire now that he is the heir, but he’s been granted special permission for one more mission… to obtain justice for his murdered brother.

Used to keeping secrets, Lady Eliza and Lord Sinclair must learn to open up to each other when they are assigned as partners to bring down the same ruthless man and his brutal empire of abduction and slavery. As Eliza’s tainted past becomes too much for her to bear alone, can she learn to trust her new partner with her secrets, her life, and possibly her heart?”

Laura Beers is a new LDS author that has been doing gangbusters on this book since it’s release. Saving Shadow is a Regency romance novel. Now truth be told I’m not really into this genre the story is so focused on Eliza and her self discovery kept me hooked, wanting to see how her character would develop throughout the book. She is a strong, independent woman but one who runs into the inevitable dilemma of how the job of being a spy is changing who she is and who she is becoming. The character development in this story (especially Eliza’s development) is top notch!

Don’t take our word for it, here are some of the reviews on Amazon

“I am usually not that interested in regency novels, but this story captured me enough that I finished the whole book within a day. I really liked the story and romance. It is a book worth reading, and I can definitely recommend it.”

Kathy (Bookworm Nation)
“I was excited to try out this debut novel by Laura Beers, it has my favorite regency setting with a fun suspense and isn’t that cover awesome!

Lady Elizabeth Beckett is not your typical regency miss, she may be the daughter of a Duke, but is also a spy. Eliza has a close circle of people she actually trusts and takes some time warming up to her new partner, Lord Benedict Sinclair. I enjoyed the idea of Eliza being a spy, which is so not your typical regency heroine. She’s good what she does and tries to make the right choices. Eliza and Benedict have good chemistry, and tension. I usually like when the romance is more natural or a little slower building, to where you feel like the H/h have really gotten to know each other and fallen in love. When it happens too quickly, it sometimes looses the believability. But I did think Eliza and Benedict were a good couple and I was rooting for them to get their HEA. The suspense/mystery was well done and kept me interested and wondering how things would all work out.

Regencies purist may have problems with some of the historical details, but overall, I thought this was a fun read and I look forward to reading more from Ms. Beers.”

“I was very surprised by Laura Beers’s debut novel, Saving Shadow. I expected a light, historically-set romantic adventure, but Beers dares to address weighty topics that are as relevant today as they were in the Regency setting. The plot moves quickly and lightly through the romance while developing an underlying conversation about ways in which women are both vulnerable and strong: The victims are women being sold into sexual slavery, and their hope rests in a woman who is propelled by her feminine strengths of compassion and observation. Interestingly, the heroine was born with these strengths but chose to develop her other skills through hard work, which makes her a delight to get to know and also stands as a believable example of a heroine who is not afraid to remain womanly while defeating bad guys. I look forward to the next book in the series!”

Julie Smith:
“Saving Shadow is a clean romance set in historical setting. The book includes dark plot points, which include forced prostitution, slavery, and death. Shadow is headstrong and relies on her instincts to guide her throughout the story. While I can respect that, I had trouble connecting with her on many levels (thus I reduced half a star on my review for this). At times, Shadow, almost seemed too perfect and I found myself wanting her to recognize her insecurities on a deeper level herself. Instead, it felt as if other people knew more about her than she knew about herself when it came to her weaknesses. I think the author has done a fabulous job at setting up a story arc for her next book and has left just enough to bait the reader into purchasing the next part of the series. Another part in the series I wish was built upon more was the fight scenes and actual spying. I felt these scenes could have been more intense. I think these scenes could have benefited from more obstacles and things just going wrong. I wish there had been a deeper fleshing out of the villain, who I found very one dimensional. (thus, another half star reduction) Overall, the book offered a strong lead who makes her way in a time that independent women are lacking. However, it did not escape my attention the only reason Shadow can do this is because of her family, her status in society, wealth, and intelligence during this time. I’m hoping the series expands on independent women who are not afforded these privileges.”

If you would like to take a look for yourself, you can get a copy of her new book on Amazon. 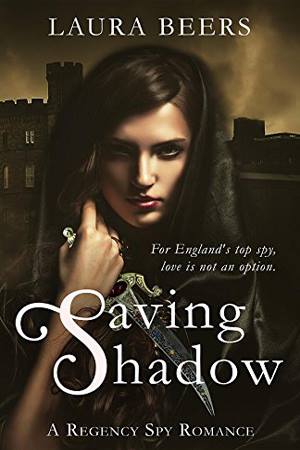