Tony and Nancy Stephenson were married in 1979. They had five children and lived in a beautiful home in West Jordan. When their youngest was 8 they were surprised to find out that baby number 6 was coming! Tawnya was born in 1997. Nancy was so excited to start this new adventure with a new little baby back in her home.

The day Tawnya was born everything went great with the birth and she was a beautiful baby! But as she started getting older she just wasn’t hitting the milestones that she should for a baby her age. They were sent to Primary Children’s Hospital in Salt Lake City, Utah and that is when Tawnya was diagnosed with Periventricular Leukomalacia or in simple terms, she was born with brain damage. Nancy remembers being confused and frustrated at such a broad diagnoses. They didn’t really know what to expect with Tawnya other then she would never be able to live a normal life.

But life continued forward and Tawnya kept growing. When she was 18 months old she started sitting up on her own! At 22 months old she was crawling and by 33 months Tawnya finally started walking! Nancy wrote in her journal at that time, “The miracle is actually happening!! Tawnya walks, she even puts her arms down. She kind of looks like a zombie with her little legs kind of stiff, but it is soooo exciting!!” Most of the time Tawnya used a walker to help her get around but life was going great! As Tawnya got older she started loving to do different activities. One day she was in the ward primary parade and loved that! She also loved water and had a little swimming pool and loved camping and being in a tent! 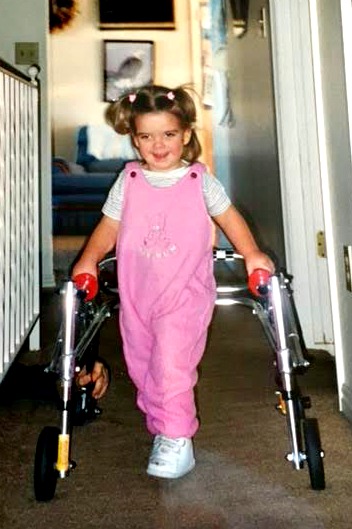 Nancy had so much support from her family. Tawnya’s older brothers and sisters loved her and took such great care of her. They also lived in an amazing ward that accepted Tawnya and loved her just as she was. Nancy knew that so many people loved her and Tawnya but she still felt like people were not prepared for Tawnya and she was caught up inside with feelings of resentment. She often asked the Lord, “You can’t give me this and then not give me answers.” But looking back she says, “I felt at the time I had no answers, but they were there. I just didn’t look in the right places. I wasn’t on my knee’s enough and just expected the answers to come.”

When Tawnya was 11, Tony and Nancy decided to move to West Point, Utah. Tawnya was involved in the young women’s program there and had a great group of young women that decided to do Tawnya’s Personal Progress for her and they later completed it on her behalf. A few years later when Tawnya was 14, Nancy found out that she had scoliosis and needed to have surgery to help fix it.

It was a Friday when she had her surgery and it went well. Nancy had been staying at the hospital with her overnight for the first few nights that Tawnya was there. She decided to go home for the night and Tony stayed at the hospital with Tawnya. Nancy remembers that she slept so well that night and woke up feeling so rested and grateful for all the blessings in her life. And then she got a phone call from the hospital. Tawnya had stopped breathing and the doctors were doing everything they could to save her but they wanted Nancy to get to the hospital right away.

The doctors were able to save Tawnya but by that point, it had been 16 minutes since she had stopped breathing and the damage had been done. As Nancy drove the long distance from West Point to the hospital she new she could not live without Tawnya and just prayed that she would still be alive when she got there. 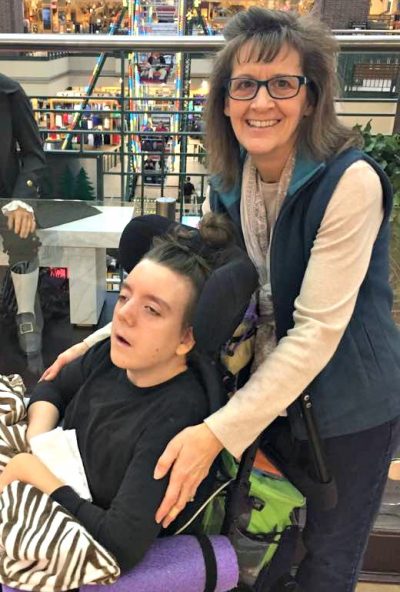 The doctors did everything they could to help lessen the damage that had been done while Tawnya’s heart had stopped beating but a lot of the damage was irreversible. Tawnya was never going to walk or talk again. She would be in a wheelchair and on feeding tubes for the rest of her life.

This year Tawnya is turning 20 years old! She lives in a care center but spends a lot of her time at home and going out on adventures with Tony, Nancy, her siblings, and many of her friends. She loves to go for strolls at city creek, the zoo, and anywhere they can get her. She loves being in the swimming pool. She also still loves being around the young women in her ward who love her so much. Even though Tawnya can’t tell us, there is no doubt that she is happy.

Nancy is so grateful that Heavenly Father has allowed Tawnya to stay on this Earth with her. There is so much love and compassion in Nancy’s heart for her sweet girl that can’t physically give that love back. But it doesn’t matter. She doesn’t have to hear the words, or receive the hugs to know that Tawnya loves her. Being near them, you can feel the love between them. Nancy always makes sure that Tawnya looks beautiful with bows in her hair, fingernails painted, and wearing jewelry. She is always rubbing Tawyna’s arms and neck to help her feel more comfortable. There is not a mother anywhere that has ever loved a daughter so much.

Nancy said that taking care of Tawnya has made her realize that she can’t get through this life alone. She said, “It has made me realize the Atonement is so much more than to cover for our sins, it is such an enabling power because I could not get through the days without it. I didn’t turn to Him enough in my earlier days and I’m so grateful that Tawnya came help me realize that. Because we can’t do it without Him. We cannot.” 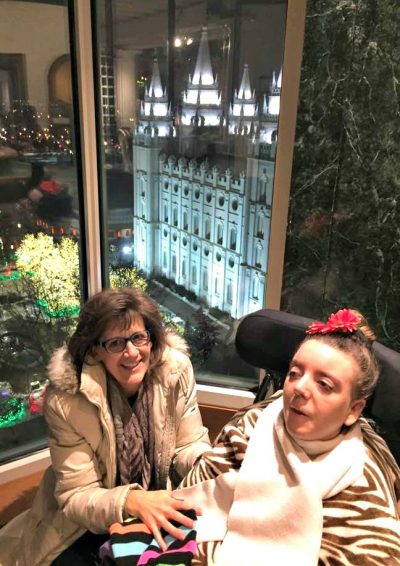 With all the love, there has also been plenty of pain and heartache. Going to Heavenly Father with so much pain is always an interesting thing. He listens first. He doesn’t immediately try and make it better. He allows us to let out that anger, sorrow, and frustration but then He comes…He always comes.  It is precisely during these moments where we learn patience, compassion, and love through His Beloved Son Jesus Christ, the Prince of Peace.

Learn more about compassion and the other principles of peace at Mormon.org

One Reply to “Learning Compassion Through My Disabled Daughter #PrinceofPeace”