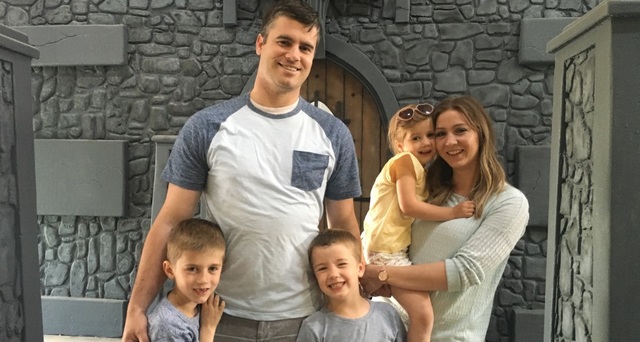 This story comes to us courtesy of LDS Living.

The following was written by Audy Leavitt, who starred with her husband Tyson on the TLC reality TV show Playhouse Masters. Read more from Audy at alwaysaudy.com.

When Tyson started a custom, luxury playhouse business just over a year ago, I was very supportive of his dream. That backing halted quickly when we were questioned by a casting director, Andy at TLC, about whether or not we might be willing to star in a family-based reality show about the business. Apparently, my participation was part of the deal.

I didn’t have to think about it. I had no desire to put myself or my family before the world audience to be critiqued, judged, or worse. I had so many reasons that I didn’t even feel the need to explain them. I’m private. I don’t have that personality. That’s not me. I’m not good enough. And plus, as soon as TLC saw who I really was, they wouldn’t want me anyway, so what was the point in trying?

There was one big problem.

What is to be done when your husband’s dream-come-true and your worst nightmare collide into one single offer? My solution was to pray—to ask God to help him see what a terrible idea this was, that it would be hard on our family and much too challenging for me. From my perspective, I couldn’t see how God would ever want us to do a reality show. I felt completely justified in my stance against it and was only determined to convince Tyson to agree.

About a week after the initial offer from TLC, and after we had had a Skype interview with Andy (which I did only to temporarily appease Tyson and because I thought it would be a complete fail anyway), I was lying in bed, unable to sleep because I felt so unsettled about the situation. Actually, I felt sick to my stomach about it. I didn’t want to crush Tyson’s dreams or force him to say no to such a rare, nearly impossible opportunity. But the prospect of being a reality star was so overwhelmingly oppositional to the person I thought I was that I couldn’t fathom moving another step forward.

Through tears, I prayed again about what to do, and still, doing the show was not on my list of reasonable answers. And then it became one in an instant. The voice of Elder Holland quoting Hebrews 10:39 (from a BYU speech he gave called “Cast Not Away Therefore Your Confidence” that I had listened to at least 15 times) came quietly into my mind.

The words were, “We are not of them who draw back.” Along with this favorite phrase came the peace and understanding that I was to go ahead with the show. I had a moment of disbelief, thinking that this just couldn’t be God’s plan for me. But I knew what I had heard and felt, and I knew what I had to do.

Read the rest of the story on LDS Living .