[wp_ad_camp_3]
Joanie Laurer, who overcame a troubled home life in Rochester, N.Y. to become one of the most famous wrestlers during the 1990’s in the World Wrestling Federation (now WWE), has died at the age of 45 according to her official website. Police found her body at her home in Redondo Beach, Calif., Wednesday, according to local media.

The news emerged after this message was posted to her Facebook page last night:

“It is with deep sadness to inform you today that we lost a true icon, a real life superhero. Joanie Laurer aka Chyna, the 9th Wonder of the World has passed away. She will live forever in the memories of her millions of fans and all of us that loved her.”

She was baptized a member of The Church of Jesus Christ of Latter-day Saints in Toyoko, Japan on April 6th, 2014 while she was teaching English there.

While she did have her struggles in life, she also accomplished a lot and was a top student at the University of Tampa.  As it described on her bio:

“She broke all gender barriers everywhere she went and continued her love of fitness throughout her college days. Chyna graduated from the University of Tampa with a 3.9 GPA and a double major in Spanish Literature in under two years. She also studied foreign languages and can speak English, Spanish, German and French. Chyna is a true humanitarian and has served in the US Army ROTC (Reserve Officer Training Corps) and the Peace Corps, helping to teach illiterate third-world children to read. She is a strong supporter of the National Animal Rescue charity, which helps domesticated animals find good, loving homes.” 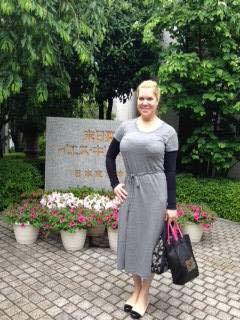 On the Facebook posting announcing her death, one fan writes:

“Chyna was a very important part of my childhood, somehow part of life… I’ve been following her career and she was important to me. She was kind and awesome, she was a very gentle and smart. I can’t stop crying because her loss hurts me the most …. I’ve been waiting for her big comeback to the WWE and her entry to the Hall of Fame because she deserve to be there…Sleep well 9th wonder.”

From those who were part of her baptism.

Our Dear Friend, Chyna passed away today. This is the Chyna we came to know and love while she was with us in Tokyo. She was (and is) a sweet, kind person. We will miss her so much. We love you Chyna, and we will see you again.

This was my sweet girl and this was one of the most beautiful days. I saw the evolution of a soul when it comes in contact with the divine-and for a moment realizes the beautiful, powerful truth of who she is. She takes that with her. At rest, finally, with the One who knew and loved you best. Til we meet again, my dear friend, Chyna. I love you forever!

40 Replies to “Chyna, Mormon and Legendary Pro Wrestler Dies at the Age of 45”