My husband got a phone call last week asking if him and I could substitute in our church’s nursery program this last Sunday. Of course he said yes, and we ended up having such a fun adventure! TEN, yes TEN little children between the ages of 18 months to about 30 months old all in one little room with just John and I. I think when their parents first dropped them off we had about 5 crying at one time between all of them!! I could see the fear in John’s face! But luckily for us the power that bubbles and marshmallows have over these children far out weighed their fears of being left alone in such a crazy situation with two adults they don’t know. It wasn’t long until we had them all settled down and happy. We were so proud!

After a quick little lesson, some songs, and yes more marshmallows (probably a little more then they would normally get, shh.) It was time to play with toys. Yes! That should be easy, just sit back and watch them play. Or maybe not…Turns out if one child picks up a toy, all the other children decide they want the same toy. And these kids are small but they are sneaky little things. I think these two boys were literally teaming up against this cute little girl to try and team steal the car she was playing with! I couldn’t believe some of their tactics. But she was all girl and the second they came near her she would clutch onto that toy car, look them right in the eyes, and yell as loud as she could “NO, MINE!” And oh did those boys back down quick!

Once church was over and all the parents came to pick up their children, that same little girl’s mom asked me how she was and if she had a hard time sharing. I guess the full time teachers had mentioned to her several times that she was having a hard time sharing her toys in class and this mom was really concerned about it. I was so surprised by this because I had thought so differently about what happened. The full time teachers in our nursery are so great and did nothing wrong, they just had a different viewpoint on this and were concerned. I think they viewed this scenario the same as so many other people would have. So I thought I would share my “parenting viewpoint” about this situation.

First off, think of your favorite thing you own. A cell phone, a purse, mine would be my kindle but it could be anything. Now imagine you are in the middle of using that item and some adult walks up to you and says it’s my turn and tries to rip that out of your hand. What would you do? You would fight to get it back. You would probably yell, “NO, MINE!” We as adults don’t like to share our things so why do we expect our children to share their things all the time? 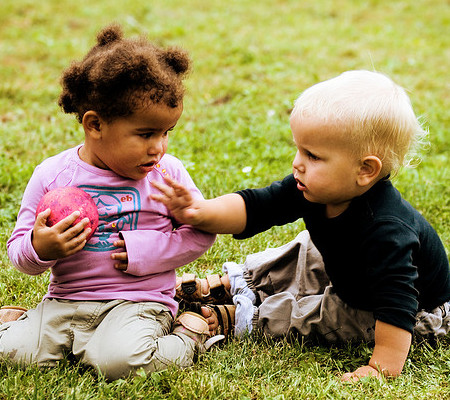 Whether a child is at home with siblings or in a group setting, when they are playing and they pick up a toy, even if they don’t technically own it, it becomes theirs. And not only that but it becomes their new favorite thing! So when another child comes along and decides they want it, and tries to rip it out of their hand they will probably start fighting. It’s human instinct to protect the things we love. But what is fair for the adult to do?  Before I had my third baby I worked in a child care center for about 10 years. I would see this situation happen so many times every single day. And for some strange reason, most adults seem to think they need to teach children how to share by taking the toy away from the child that had it and giving it to the child that wants it. They would all say “We need to share the toys.”

There are two problems if you do this. First, the child that had the toy loses some trust in the adult. They had something and now you just came along, took it away, and gave it to someone else. You have taught them that they can’t take ownership in their things and you have also taken away an 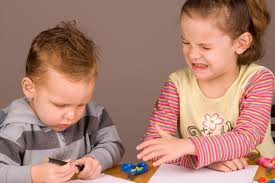 So now that you see my point, how do you do this? It’s super easy! Just explain to the child that wants the toy that someone else is playing with it right now and when they are done, you can have a turn. You need to be patient (yes use that long word. Even if they don’t know exactly what it means, you are introducing it to them and they will catch on.) Then help them find something else that will entertain them while they wait. If you don’t they will probably just keep trying to take the one they want. It might take a little bit more work on your part but in the end, you will have two happy kids and they will both learn great skills they will need as an adult.

But I do understand that in some situations, we do have to make our kids share something they are using or take turns with something and that is fine. A good way to go about this is before anyone gets the item that has to be shared, explain to the children that they have to share it and they will only get to use it for a short amount of time. Then help them by telling them several times how much more time they have. ie 5 more minutes, 3 more minutes, 1 more minute, ten more seconds, then count out loud to ten. This will help prepare them to give it up and finish up whatever they were doing with it.  It can also help the other children who are waiting to see the end of their waiting time.

I hope if this is something you or your child have been struggling with, that this little tidbit of advice will help. And I hope I can bring a little more peace to all nurseries everywhere. And if not, just try bubbles and marshmallows. That will probably work too!!