A group of young single adults lounged in the grass at a seaside park in Laguna Beach, California. Among them was a barely 22-year-old recently returned missionary and a lovely 28-year-old girl originally from Mexico.

The reason for being there that bright, sunny afternoon, was to eat, enjoy one another’s company, and await the holiday fireworks that were promised later. However, it became readily apparent that the returned missionary and the Mexican girl only had eyes for each other.

Since barely mid-June, the two had been officially dating. Before that, they had gone to various activities together, and before that, the return missionary had been home in Oregon, trying to figure out how to get back—with no money and no car—to Orange County, California where he’d served his mission and where he knew jobs could be found.

That particular problem had been solved because the girl paid the young man’s bus fare to California, and had done so, she insisted, with no other ulterior motives or designs but to help. Her statement is backed up quite well based on the fact that she didn’t really like him when he was missionary.

He was too serious, she said.

What the two talked, smiled and laughed about that fine, SoCal day is now lost to time. All, that is, except for an enduring snippet of conversation that would set the two on the path to marriage, a twenty-seven year and counting life together with the hope of an eternity by each other’s side still somewhere over the horizon.

The fact that this snippet of conversation was brought up at all is not out of the ordinary. Nor is the subject matter—somehow, the topic had swerved into deciding on a month to get married in.

What was somewhat unique to the late 80s was who was bringing it all up—the girl. The exact words are forgotten, but the gist was, “When would you like to get married?”

Now, as is her way, it was done in a playful tone, but without much context. And yet, the young man was not so much taken aback by her asking the question as he was perplexed as to why she was the one asking it. Or maybe it was the way the question was framed, since it basically jumped over whether or not they should even get married in the first place.

A couple of things are clear. His momentary loss for words isn’t because he wasn’t ready for the commitment. You see, sometime after his mission ended that March, he determined his next step was to get married and start a family, and do it sooner than later. Even if that meant now, when he barely had a job, only a year of college behind him and no real thoughts to his future other than somehow it would all work out.

And it certainly wasn’t because of the girl. When she smiled, time stood still. He could get lost in her laughter, and frequently, he did. He could easily see them raising a family and being happy.

Who knows why his mind went blank? But it did. Maybe it was because he couldn’t figure out how she had beaten him to the asking.

Well, unbeknownst to him at the time, the girl, who was a convert to the Church of not quite two years, had at some interim point been talking with her bishop, L. Whitney Clayton, and wondering out loud if she should go on a mission. Apparently, the prospects of getting married seemed distant to her and she decided she should put herself to good use doing something worthwhile.

Bishop Clayton’s reply? “Your mission is to get married.”

Who knows now how much that talk with her bishop affected the discussion months later, in the grass at Laguna, but it was surely lingering somewhere in the back of her mind. So when the young man finally managed something like, “Um, I don’t know,” she offered, “How about November?”

With an actual month placed before him, the young man’s attention was easily diverted from the more life altering first question to the new quandary requiring a solution. All that he could think of to say was, “November’s a little soon, don’t you think?”

“How about January?” the girl countered.

After a pause, wherein he decided the idea sounded reasonable, the young man said, “January’s better.”

Memory blurs after that. Who knows if they even watched the fireworks after the sunset? Six months flew by, and before either of them could catch their breath, they were kneeling across from one another at the alter, him smiling like a lunatic and her expression akin to a doe in the headlights. Then, that briefest of ordinances was over, and the adventure of their lives began.

It may seem hard to believe that something so important could be done on what amounts to a whim, but it’s true. As far as the young man is concerned, there was no forethought, no proposal on bended knee, no engagement ring (that came later), and certainly no elaborate proposal. Just opportunity, a lovely beach setting, and as it turns out, perfect timing. 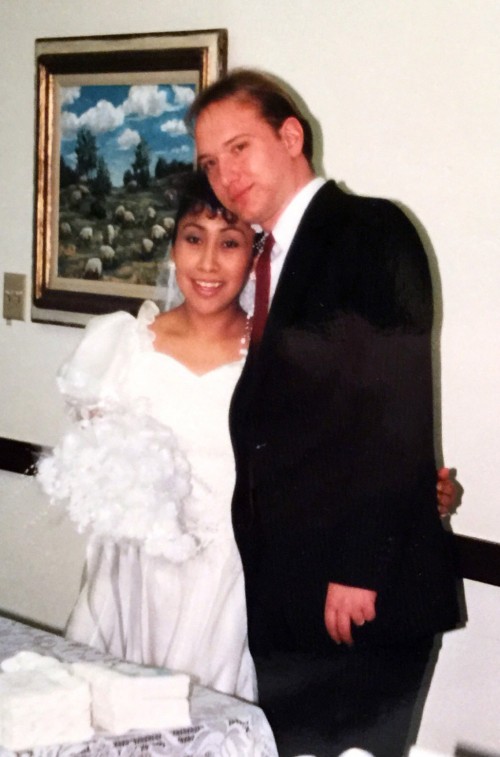 And it was the girl who initiated it all.

Even if she continues to deny it to this day every time the story is told.

That’s okay. She can protest all she wants. She still doesn’t have a better story. When asked for her version, she starts to say something, stops, and looking off into the distance, she whispers, “I don’t remember.”

What she does claim, vigorously—27-plus years on, two sons, a nice home, countless hours working to provide for the family, and all the money earned and spent, some of it on her birthdays, the anniversaries and all the vacations to Mexico she went on alone or with the boys—

—is that I still owe her the bus fare.

One Reply to “When you got married, who proposed to whom?”