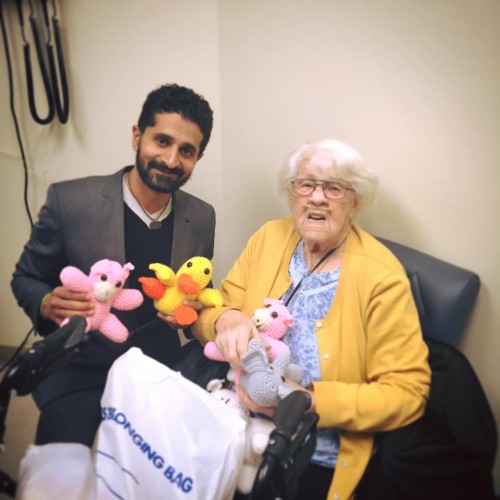 [wp_ad_camp_3]
On December 7th, Fahim Rahim posted a photo of himself and one of his patients to his Facebook page who had come in to give him gifts in light of Donald Trump’s recent remarks about Muslims.

In a conversation with the EastIdahoNews.com Rahim said that the woman, whom he refers to as “Grandma Louise,” heard him on a local radio show responding to Trump’s comments about Muslims.

Hours later, she showed up at his medical office with the stuffed animals she had crocheted herself.

“This is a 91-year-old white, Mormon woman who came to comfort a dark, Muslim man,” Rahim said. “I’m her doctor but she’s the one who came in and healed me.”

[tweetthis remove_hidden_hashtags=”true”]This is a 91-year-old white, Mormon woman who came to comfort a dark, Muslim man[/tweetthis]

Rahim said he was touched by Louise’s compassion and snapped a photo with her. He later posted it on his personal Facebook page, and when he woke up the next morning it had been shared thousands of times.

“I had no idea it would spread so fast,” Rahim said. “Grandma Louise is now the most beloved grandma in the USA.”

The story of Louise and Rahim has been featured on The Huffington Post, and Rahim said television news networks have contacted him.

“My intention is to show the world that this is the real American spirit,” Rahim said. “We connected on humanity and that is what matters.”

Rahim and Louise said they’re personally inviting Trump to meet with them in Idaho Falls for a cordial conversation. They hope to present him with a special gift: one of Louise’s crocheted stuffed animals.