[wp_ad_camp_3]
So we’ve all heard them. Little lies that our parents have told us growing up and so we asked our fans on LDS S.M.I.L.E. and the LDS S.M.I.L.E. Youth Group to share with us some of their most humorous lies that their parents told them growing up. Below are some of the funniest stories that were shared with us.

If you have your own story that you would like to share with us, post your story below in the comments and we’ll make sure to include them in our follow up piece to this story.

I remember how scared I was for the longest time in Sacrament meeting because when I was being loud my older sisters told me to be quiet and that if I wasn’t quiet, “The Note Taker” would write down my name on his little list and after Sacrament meeting I would have to sit in time out in his office.

Even now that I’m a bit older, I still have flashbacks to when I was little watching the ward clerk.

Bumps on your tongue

My Primary teacher (who happened to be my mom and dad) told us in Primary one day that all of the bumps on our tongue were caused by lying. Then one day my mom had a huge canker sore on her tongue and I gasped and yelled “Mom! What did you say?!”

My dad used to tell me that the oil spots we saw in the parking lot at church were children who got ran over because they didn’t hold their parent’s hands.

My dad would give us gum during Sacrament meeting but told us if we swallowed the gum, it would make our poop bounce up and down in the toilet. I cried every time I swallowed gum for years.

Chalkboard My dad told me that if I go behind the stage curtain in the gym/overflow a homeless man would kidnap me and force me to clean chalk boards for the rest of my life.

My mom told me that hills were places where they buried giants. Our church building sat at the top of a giant hill. Maybe now she’ll understand why I hated going to church every Sunday. Thanks mom!

One time as we were going to a mutual activity at night, my mom started yelling at me because I turned on the interior lights on in the car. She said if you did that, you would get a ticket. I’ve believed that lie for my entire life and even about two months ago, my husband turn the lights on and I started yelling at him because I didn’t want a ticket. I’m 29…but as it turns out, even though it’s still not a good idea, it’s not illegal. *reference*

Growing up on a farm I had a favorite chicken when I was younger. One day I remembered waking up and not being able to find the chicken. I started to cry and asked my dad what happened to it? My dad told me that the bishop (our next door neighbor) took the chicken back to the chicken farm so she could play with all of her chicken friends.

Years later during a Christmas party at our house, I asked my dad about the chicken and he just stared at me. Then he replied, don’t you recall that we had chicken soup for dinner that night? I almost started crying as a grown man again.

When Two People Love Each Other

My parents always told us growing up that two people had babies when they loved each other. I had a huge crush on a girl in my Primary class and one day she told me she had a crush on me as well. I told her that we had to stop liking each other right away before the “love” we had for one another created a baby. It really wasn’t a lie but the details were just a bit off. Hahaha

One day during Sacrament meeting, an ice cream truck drove by. My siblings and I wanted to go get ice cream and asked our parents if we could go get some. Instead of telling us that it was Sunday or talking to us about the Sabbath, they simply said that “when the ice cream truck is playing its music, it means it’s out of ice cream.” We were disappointed for years growing up whenever we heard the ice cream truck play its music as it drove by.

My dad told me that the bell I heard during primary (the 5 minute bell that they rang before a block was finished) was because a child was being naughty and had been sent home.

My cousin said his parents told them that Fast Sunday meant that church actually went faster, so they were always really excited for Fast Sunday.

Both my parents were inactive when I was little. They would tell me that I had to go to church without them because it was a test to see how I would act when they were not there, kind of like the Plan of Salvation. I believed this for years until my teacher asked me about my parents and I told her this story. She just chuckling and said that’s one way to look at it.

My mom used to say that I should behave in sacrament meeting or the stake president will get mad at me [and interview me in his office]. My dad was a bishop that time and the stake president is in our ward, and he doesn’t look friendly at all, that was I thought when I was kid. He doesn’t look bad now that I think of it. He just kinda looks strict before that it scares me hahaha. He’s the father of my childhood friend though. His presence used to scare me, I dunno why ahhaha. 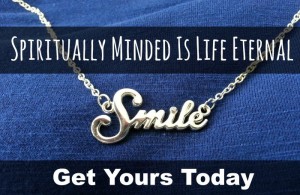 Get your S.M.I.L.E. necklace today