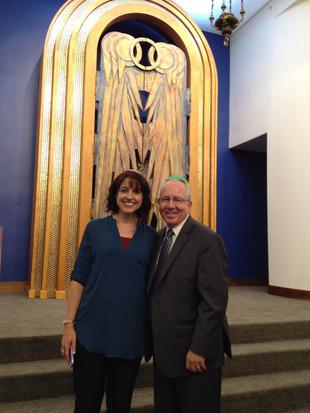 Early last year, the Temple Beth Sholom in Santa Ana, California, was incredibly damaged in an unexpected kitchen fire. The fire was caused by a broken refrigerator, and lead to severe damage of the Jewish synagogue’s sanctuary, as well as the holy ark, which contained many important artifacts, including several old and valuable torahs.

The synagogue cost over 7 million dollars and they started the fundraising effort to rebuild the sacred building.  They recently finished the rebuild of the synagogue and are now moving back into the building to start their worship services again.

Rabbi Heidi Cohen couldn’t imagine how she would find a temporary home for worship for the 500 families in her care.   Soon however, she was on the phone with the stake president of the Orange California Stake in California.

What adds to the story is that the Temple Beth Sholom actually housed the LDS congregation over 50 years ago when the LDS chapel was under construction and now the members of this ward were able return the same generosity that was shown to them over 50 years ago.

“Amazing,” Rabbi Cohen said. “We didn’t even know each other, but basically it’s a friendship that’s always been there.”

On the first Friday night, on what is Shabbath or Sabbath for Jews, hundreds of members of the synagogue filled the Mormon chapel in Orange, a mile from Temple Beth Sholom. The meeting spilled into the building’s gym, used for overflow for large events.

Rabbi Cohen invited Goodman to speak at the beginning of the service.

“It’s an honor to be here,” he said, wearing a Jewish yarmulke. “We welcome you. We’re glad we can serve you in your time of need.

“Tonight, we are all Jewish.”

Having these two congregations share the same space led to many new friendships and better understanding of the two religions.

After a long year and a half of fundraising and rebuilding, the congregation was finally able to return home on August 30th. The ceremony drew hundreds of people and celebrated the return home with a blessing called Shehecheyanu. Also, three of the torahs that sustained damage in the original fire were able to be restored by local scribes. This is extremely important because the torahs were over a century old, and one was even recovered from an old Nazi warehouse. The congregation of Temple Beth Sholom is extremely grateful to have finally returned home. The new sanctuary is representative of the strength of the congregation and its leaders, as well as the generosity of those who took them in during a difficult time, including their neighbors from the Church of Jesus Christ of Latter-Day Saints.