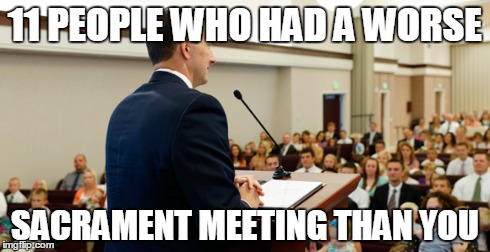 As always, if you have a story to tell, feel free to leave a comment below as these are the comments we use to make these posts. Thanks for the laughs everyone.

My daughter was bearing her testimony and she was talking about how much she loved our family. She said that “my family does everything together. We walk, we read stories and we do meth together.” I just about fell out of my seat. I kind of felt obligated to go up and bear my testimony and make a slight clarification on how we actually do “math” together and I promised the congregation that we don’t do “meth” together.

This was when I was 12 and a newly called deacon.  I was still super nervous passing the Sacrament and all I kept thinking about was not screwing up.  As I was passing the Sacrament in the overflow section, I had to come around a chair that was kind of close to the chalk board.  As I came around my pants caught the corner of the chalk board and ripped my pants all the way down to my leg.  I didn’t know what else to do other than pinch my bum and hold my torn pants together with one hand and pass the Sacrament with the other.

My husband was in the bishopric and so I sat as I usually did with my four children.  Well my son accidentally passed some gas and right as he did my youngest who was 4 just got up and ran to my husband on the stand yelling “Tyson farted dad! Tyson farted!” the entire way up.  The entire congregation was laughing so hard and I quickly ran up to grab her incredibly embarrassed.

5. Craziness at the Podium

“One of the older boys (during the primary program) was reading a scripture and all of a sudden just collapsed. Everyone started to gasp and panic and the bishopric quickly bent down to help him. A few seconds later he got up and back to the podium and said ‘see Dad, I told you I wouldn’t chicken out and now you owe me $10.’ The Dad was so embarrassed he walked out of the Sacrament Meeting. Pretty sure the Dad never thought his son was actually going through with it. Lesson, don’t challenge your kid unless you want to see them excel with flying colors.”

“My friend and I were blessing the sacrament as we always did and he was going to say the blessing on the water. As he was kneeling down to bless it, he hit his head on the little pull out microphone thing. Well he grunted and let out a mini shriek as he was grimacing in pain for a few seconds. The problem was that the microphone was on and could hear every little sound he made. Needless to say he was super embarrassed. Just to add the cherry on top, when he finally composed himself enough to say the prayer, he messed up on the prayer twice and had to say the prayer three times total.

“I was potty training my little girl. Every Sunday it was a full on workout just trying to keep her to sit still. It was also hard because we were in an older ward and we were one of only 3 families that even had any little children so a lot of other members would get annoyed at how loud my kids tended to be.

One Sacrament meeting right in the middle of the speaker’s talk I heard an old lady in the back shout out ‘Sister Dayton, Sister Dayton…your little girl needs you.’ Everyone in the ward looked back and I saw my 2 year old swinging her diaper in the air as she was running butt naked out the doors.”

When I was a deacon the bishop’s son sitting next to me pulled out an M80 firecracker and a lighter while we were seated to pass sacrament. During the opening hymn He was passing the firecracker back and forth near the flame while laughing at us for shaking our heads no as vigorously as we could muster. Sure enough just after the song ended and right after we hear “Dear Heavenly Father” I hear the unmistakable sound of a lit fuse next to me and open my eyes just in time to see the kid lean forward and pitch the explosive device under the pews where it landed 3 rows behind us. The explosion was louder than anything I had ever heard. Men, women, and children of all ages screamed like banshees. The bishop jumped up and made a bee line for the culprit and escorted him away for punishment. When my friend grew up and became bishop of the same ward the old firecracker in sacrament story would surface every now and again and served as better punishment than the original I’m sure.

When my brother was about 2, my mom dropped him off for nursery and came back a few min later to check on him but he wasn’t there and the teacher told my mom he never came. My mom figured he left while her back was turned and frantically started searching the church for him when she suddenly hears the speakers come on with the voice of my brother. “I hate church!!!!!!!!!! I hate all of you!!!!” He had run up to the podium, All during another wards sacrament meeting ringing throughout the pure silence screams words of hatred. During. Sacrament. 0-0. My mom was absolutely mortified and found him being dragged out of the chapel screaming and crying in that wards bishop’s arms. She made triple sure he stayed put in nursery from then on. 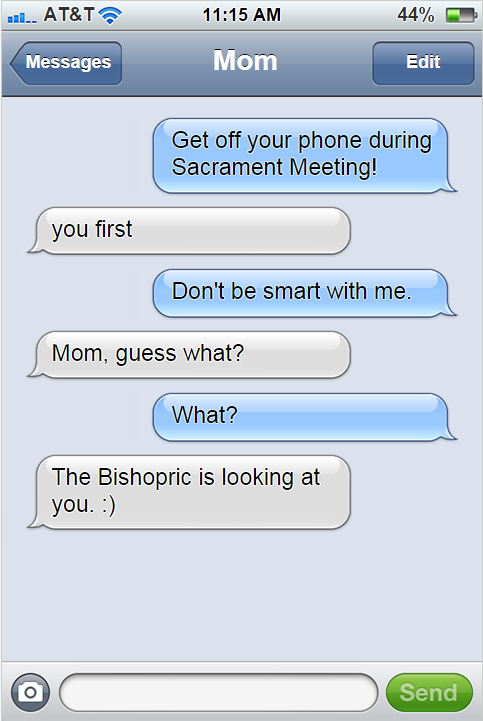