In light of last season’s brawl in Miami, radio host Mike Welch tweeted out the following. 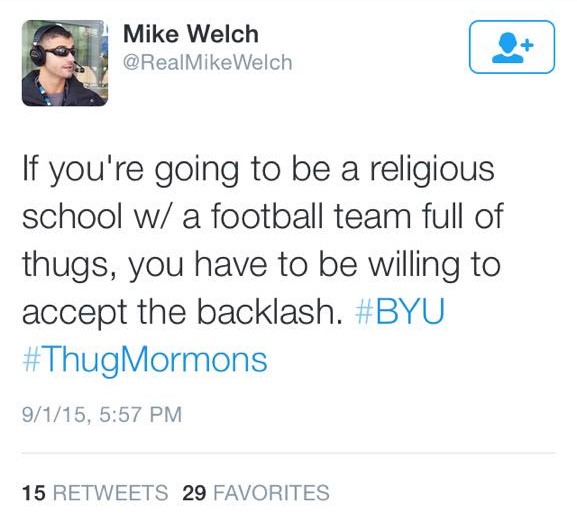 Well as you can imagine, BYU fans and Mormons from around the world jumped onto this bandwagon and the results were hilarious. Here are some of the best tweets from the hashtage #thugmormon. Also, leave your own #thugmormon in the comments below.

Goes on a date 2 weeks before their 16th birthday. #thugmormon

When being helped with the prayer growing up. If I didn't like what was whispered in my ear. I would shake my head and say no. #ThugMormon

I take three pieces of bread during the Sacrament on Fast Sunday. #ThugMormon

I say no to callings. #ThugMormon

You never wanna run into these guys in a dark alley. #ThugMormon pic.twitter.com/WxsNeIHggb

I say no to callings. #ThugMormon

Open mission call alone, without being filmed, and call parents later to let them know where you're going. #ThugMormon

When reading the Book of Mormon, I sometimes skip the words of Isaiah. #ThugMormon

Staying a virgin into your 20s. #ThugMormon

When I was in primary, I wouldn't jump out my seat during the "beam" part in "Jesus wants me for a Sunbeam" #ThugMormon

I went home teaching on the last day of the month, didn't share a message, just took cookies, you know beacuse #ThugMormon

Driving 20 minutes for a 64 oz. Mtn Dew on Sunday so your neighbors don't see you shopping on the Sabbath #thugmormon