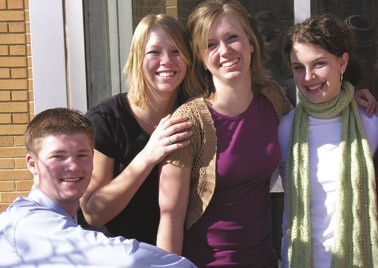 An article that appeared in Time Magazine yesterday is making the rounds this morning. The article titled “What Two Religions Tell Us About the Modern Dating Crisis” talks about the disproportionate number of females to males in both the Mormon and Jewish religion.

The article boils downs to the fact that “It’s not that He’s Just Not That Into You—it’s that There Just Aren’t Enough of Him.” According to recent data by ARIS, there are three women for every two LDS men.

Tristen Ure Hunt who is a 35-year-old who runs a LDS Matchmaking website told Jon Birger:

You have no idea how big a problem this is. I have three times more single women than single men in my matchmaking database. My heartstrings are pulled daily because I have ten friends—“all good LDS girls!”—who gave up on finding a husband and decided to have children on their own.

Cynthia Bowman, a veterinarian in San Diego added her perspective on this “dating crisis”:

They (the men) wait for the next, more perfect woman…There might actually be a more promiscuous dating culture than there otherwise would be in the Mormon culture because of this gap.

This problem isn’t only isolated to the LDS community, many Orthodox Jewish Communities as well.

Lisa Elefant, a shadchan—or Jewish matchmaker—affiliated with the Ohr Naava: Women’s Torah Center in the Sheepshead Bay section of Brooklyn talked about how she doesn’t “sleep at night” any longer because of this issue.

When Elefant attended Jewish high school 30 years ago, “there were maybe three girls that didn’t get married by the time they were twenty or twenty-one,” she said. “Today, if you look at the girls who graduated five years ago, there are probably thirty girls who are not yet married. Overall, there are thousands of unmarried girls in their late twenties. It’s total chaos.”

This trend that we see in these communities in part helps to explain why more and more LDS men are waiting longer and longer to settle down. It also in part helps explain some of the recent council we have received from members of the Twelve.

If you are a young man of appropriate age and are not married, don’t waste time in idle pursuits. Get on with life and focus on getting married. Don’t just coast through this period of life.

Elder Oaks addressed the same issue in a 2005 CES Fireside address he made:

This tendency to postpone adult responsibilities, including marriage and family, is surely visible among our Latter-day Saint young adults. The average age at marriage has increased in the last few decades, and the number of children born to LDS married couples has decreased. It is timely to share some concerns about some current practices in the relationships of young LDS singles in North America.

As members of The Church of Jesus Christ of Latter-day Saints, we understand that getting married is more than simply a lifestyle choice. It’s a spiritual obligation and whether in this life or the next, we believe that ultimately for an individual to reach the highest degree of glory, one must enter into the eternal covenants made in the sealing ordinance.

As can clearly be seen by many of the leaders of the church and those who are closely following this trend, the problem doesn’t simply make it harder for women to get married in the church but it also changes their behavior as well. The article points out “according to sociologists, economists and psychologists who have studied sex ratios throughout history, the culture is less likely to emphasize courtship and monogamy when women are in oversupply. Heterosexual men are more likely to play the field, and heterosexual women must compete for men’s attention.”

How do we solve this “dating crisis” that we are currently facing? Well, that’s the question we pose to all of you. Comment below with your thoughts and perspectives on this issue below.

One Reply to “The Mormon and Jewish Dating Problem”