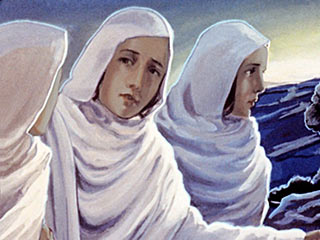 We have all heard the story of the three wise men that brought gifts to baby Jesus. However, it probably would have been a lot different situation had it been three wise women that showed up instead. For instances:

First and foremost the women would have showed up on time.

Did you realize that the wise men didn’t appear until Jesus was a young child? In Matthew 2:11 it states

“And when they were come into the house, they saw the young child with Mary his mother…”

First it says that they had come into the house not a manger. Secondly it states young child not infant. What took the wise men so long to get to baby Jesus? Honestly they probably got lost and refused to ask for directions. Had it been women instead, they would have asked for direction as opposed to simply following the vague direction of a star.

Having been on time, they would have been able to help clean up the stable

It’s not because they are simply women that would have helped clean the stable but more to the point that it is hard to help clean a stable when you are a few years late in arriving.

They would have wrapped the gold, frankincense and myrrh

I mean seriously, who gives a gift without wrapping it? That’s definitely something only a guy would do.

In addition to the gold, and frankincense, and myrrh they would have brought along practical gifts as well

Gold, frankincense and myrrh is good and all but diapers would have been nice. Perhaps some infant toys or blankets would have helped as well? Also, they most likely would have brought over some casserole or other food for the couple for dinner along with some kind of dessert.

Their conversations as they left would have been priceless

All women love to talk about the cute babies after they leave and these wise women would have been no different. I can imagine the conversation now…”Did you see baby Jesus? He looks nothing like Joseph at all.” Or “Want to bet how on how long it will take to get your casserole dish back?”

They would have asked Mary “is there anything we can do for you?”

Because that’s the inner visiting teacher coming out in all women along with leaving an inspirational message and a closing prayer.

They would have stayed in touch

I mean, did the wise men get abducted by aliens when they left? Why is it that you never hear of them again? You would think that if you had the glorious opportunity to see Jesus face to face that you would want to spend as much time with Him as possible. Honestly it’s probably because they had the mindset of simply leaving the family alone and minding their own business whereas the three wise women would have set up play dates with their kids, had him over for sleepovers and pretty much done everything with the family growing up.

7 Replies to “What If It Had Been Three Wise Women That Showed Up?”