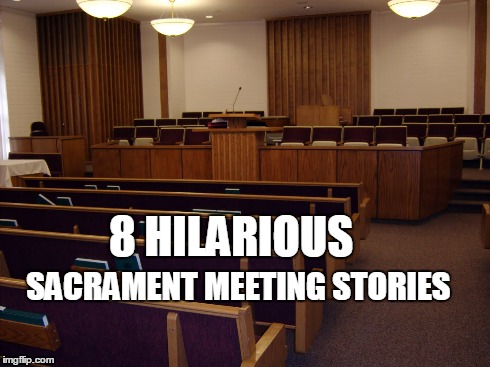 Our teenage son received a Star Trek tie pin for Christmas one year. Imagine how hard it was not to crack up when he folded his arms for the opening prayer and we heard “Bridge here. Status report”.

We had three kids who were constantly moving and wouldn’t sit still. One Sunday my youngest got into the aisle and ran towards the back. I told my oldest who was six to go grab his younger brother. He went out to grab him and a few seconds later I looked to see what was taking so long and right as I did my oldest yelled out “he doesn’t want to come”. Then you heard chuckling from the back because my oldest son had been pulling on him to come but managed to pull off my youngest’s pants and diaper. I immediately ran back, grabbed him and took him out while he was laughing and shouting “naked boy, naked boy”

What did he just say?

One Sunday the bishop told the congregation how grateful he was for those who fulfill callings. My daughter then whispered to me “How does the Bishop know Phil Collins?”

In my Aunt’s ward the speaker was talking about Satan and the ways he tries to tempt us to do evil. A young boy stood up in the middle of the aisle, raised one arm in the air, and shouted “I say we kill the beast!” Laughter from the crowd followed.

My husband went up during testimony meeting and bore his testimony. Right after he came back down my oldest son went up and said “Just wanted to let everyone know that my dad is an impostor and only came up because my mom told him to come up. In the name of Jesus Christ amen.”

I’m a young women in a small ward with two little siblings, 8 and 6. During the primary program, a boy about nine or ten was saying his little part up at the podium. “I like to watch General Conference with my family…” quietly he then says, “…no I don’t.” The congregation had a good laugh out of that.

My dad used to be the Bishop of a ward we lived in in Pennsylvania. My parents had moved away for a few years and had come back for a visit. Of course, my Dad got up to bear his testimony. My 5 year old son had been sitting on his lap, so my father took him up with him. About 2/3 of the way through his testimony, without my father seeing, my son started running around on the stand, through the aisles on the stand, up around the piano etc. My father finished up and turned to get my son. He was obviously surprised he wasn’t still standing right there, and the congregation had a little chuckle, because we all knew exactly where he was. Once my father walked around the row to get him, my son obviously, with the laughter he heard, thought this was some type of game. It took about two minutes (which felt like eternity) for someone to capture him. I was stuck in the middle of the row, and just wanted to slide under the bench for the rest of sacrament meeting. Oh, the days……

The Circus aka my Kids

As a mom of 5 young kids, I have had numerous embarrassing moments in Sacrament Meeting. Like the flying goldfish, when my young son threw goldfish crackers high into the air and they rained down on everyone within 3-5 rows of us. I thought that was the crowning moment of our circus act we perform each Sunday until a few weeks ago when my adventurous 2 year old daughter got away from me by climbing under the benches in front of us. Sacrament meeting was nearly done, the closing hymn was ending and the closing prayer about to be started. I watched for her to see where she would pop up. The prayer started but I didn’t close my eyes, I was still watching for my daughter. Then I saw her climbing the stairs at the front of the chapel and heading straight for the piano. I immediately whispered to my oldest son, who was sitting at the end of the bench, to go get her but he didn’t make it before she climbed up on the piano bench and began pounding on the piano during the closing prayer. Ten seconds later, that felt like eternity, my son reached her and grabbed her off the piano bench and she then began to squeal and throw a fit. Truly an embarrassing moment for me but everyone got a good laugh that day at church.