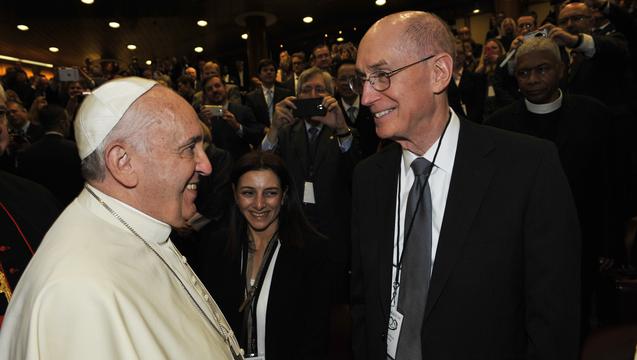 VATICAN CITY —
Opening the historic meeting of religious leaders gathered at the Vatican to discuss the importance of marriage, Pope Francis said, “For most of us, the family provides the principal place where we can aspire to greatness as we strive to realize our full capacity for virtue and charity.”

“I pray that your colloquium will be an inspiration to all who seek to support and strengthen the union of man and woman in marriage as a unique, natural, fundamental and beautiful good for persons, communities, and whole societies,” Pope Francis said.

From Synod Hall, Pope Francis addressed hundreds of religious leaders and scholars from 14 faith traditions and 23 countries who are gathered for the colloquium on the family, titled “The Complementarity of Man and Woman.”

“Evidence is mounting that the decline of the marriage culture is associated with increased poverty and a host of other social ills, disproportionately affecting women, children and the elderly,” Pope Francis said. “It is always they who suffer the most in this crisis.”

Just after his address, Pope Francis warmly individually greeted and shook hands with several faith leaders, including President Henry B. Eyring of the First Presidency of The Church of Jesus Christ of Latter-day Saints. President Eyring will address the gathering Tuesday.

Read the rest of the post from the Mormon Newsroom