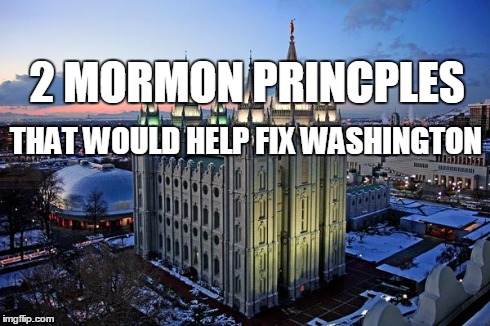 [wp_ad_camp_1]
This isn’t meant to be an all encompassing fix all post to the problems we face in Washington as there still are many issues that we still face even within the church. That being said, I believe that the following principles that can be found within The Church of Jesus Christ of Latter-day Saints (Mormons) would go a long measure in fixing the many issues we face as a nation and in Washington.

Though taught within other religions as well, the church places a heavy emphasis on the topic of the “Widow’s mite” when it comes to how they spend their tithe and fast money. Leaders within the church are constantly taught and reminded of this principle and that every resource that is spent within the church ought to be done so with great caution and consideration.

Another principle closely associated with this is living within our means. This doesn’t mean that we have to pay for everything up front as we borrow from institutions and from banks for purchases of homes, cars, schooling and other important large purchase items. However, it does mean that even for the aforementioned purchases, we borrow prudently, wisely and don’t spend money on unnecessary items. We budget and even when there are multiple competing interests, we have to make tough decisions and prioritize the timing and amount of our spending. Within the church, this principle of living within our means is heavily taught and practiced.

If the legislators in Washington were to treat the tax payer’s dollars as the church treats tithe money, the amount of wasted spending and buddy to buddy earmark deals would be dramatically lower than they currently are.  They would view that money in a much more sacred light and keep a better perspective of where that money comes from.

There are not many individuals in this country who believe that Washington is simply just not spending enough.   We may argue as to where they are allocating and spending the money but a clear  consensus is that they are spending too much.

According to Clayton Christensen, a duality that is critical to successful innovation is

Many might not view the church as having a culture that allows innovation to be developed and wildly adopted but when you break it down and look at the big picture, it is quite astonishing at how the church is able to manage innovation on a worldwide scale with the restrictions and caution it must take being a large multinational religious organization.

Clearly it is not as nimble or as innovate as a small new tech firm that has much more flexibility than a large multinational religious organization but when compared to other organizations with similar restrictions and cautions that must be adhered to, it is quite impressive how innovate the church really is.  But I digress..

For behold, it is not meet that I should command in all things. Men should be anxiously engaged in a good cause, and do many things of their own free will; for the power is in them. He that doeth not anything until he is commanded, the same is damned

We as members of the church have heard this scripture quite often and are taught that it is not up to the Lord to command in all things. We are commanded to go out and do great things on our own. This scripture presents the notion that we are agents, able to go out and change future outcomes which creates a culture within many members of the church to make changes or fix problems that may exists within the local congregation.

Christensen expounds on this duality

Responsibility for innovation is dispersed and bottom-up. When a better way is discovered, top-down direction drives broad and uniform adoption.

Examples include our systems of welfare, teaching our children, missionary programs and ability to help the unemployed to find work are all examples of innovate solutions from local leaders to deal with local problems. As the leaders of the church learned of these systems and a better way was found, the second portion mentioned above (the instinct to follow leader’s guidance), help led the church to be able to implement large scale changes and have members adopt those changes.

One could argue that the Washington could follow in a similar pattern, using states and cities as “real live laboratories” in testing and experimenting with innovative solutions to the many challenges that we face in our country.  However, even if Washington were to find amazing ways and solutions to problems by looking to the states and cities as a proving ground, it is clearly missing leadership that inspires, that transcends party lines, dogmas and special interest groups so that even if a better way was found, the implementation of the said policy would be near impossible to get buy in from the public at large to make effective and broad acceptance and  implementation of the policy/program.

Clearly not all of the nation’s problems would be magically solved in the blink of an eye with implementing these principles. We still struggle within the church of continuing to help out the poor and the needy. Helping out those who are unemployed or those families in need.

However, if the aforementioned principles were taught and instilled within the American people and the institutions in Washington, many of the issues we are currently facing would be greatly minimized. The solutions we could solve and the resources we would have in order to solve them would be dramatically increased.