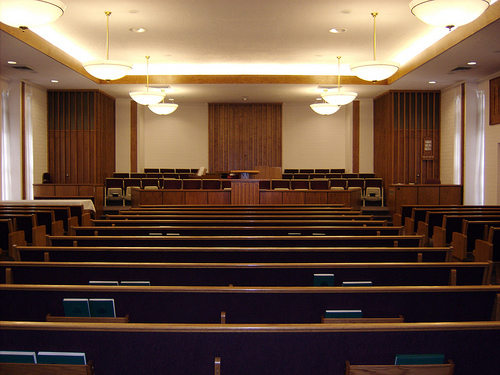 An infant boy was about to be blessed by his grandfather. The older gentleman started the blessing, but instead of the words to a baby blessing he began conferring the Aaronic Priesthood on the baby. He realized his mistake, stopped, and said, “Undo, undo.” Then he gave the baby his blessing. Now when we do something wrong, we sometimes stop and say, “Undo, undo.”

My three year old son asked me what was going on, and I replied that they were about to bless a baby. His eyes got big and, as loud as he could, he asked with horror, “TO EAT IT?!”

During the primary program at church, my 4 year old brother was giving the prayer and my mom was standing next to him to help him in case he needed it even though he could do the prayer mostly on his own. He kind of stumbled during the last part of the prayer and my mom leaned in to help him and he yelled over the pulpit “Mom! I’m talking to Heavenly Father, stop talking!” and followed up by saying “Heavenly Father, please forgive my mom, she was only trying to help.”

The next week we were running late and got there at the end of the administration of the Sacrament and noticed that the young women were passing the Sacrament again. We talked with the branch president and he said “I know, I remember that you Elders said that they couldn’t pass the Sacrament last week because they didn’t have the priesthood, so I gave it to them after the meeting.”

God, Is That You?

Our youngest son has never been able to whisper. Even at 13, he is practically still talking as he tries to whisper; when he was younger, it was even worse. One Sunday – he had to have been just a little more than 3 – one of the priests knelt behind the sacrament table and started to bless the bread. My son looked up to the podium to see who was speaking. Upon seeing no one, he very loudly “whispered,” “I hear GOD!”

My mother told me the story of one Sunday she will never forget. My mother had 6 children in 8 years, I am the fourth. When my two little brothers were young, they are 15 months apart, my mother at the time was weaning my youngest brother off nursing. One Sunday when she thought we were finally being quiet, she was really enjoying the speaker and not paying much attention to what the kids were doing because we were quiet. Then she started getting weird looks from the Bishop. Not realizing they were directed at her, she kept listening intently to the speaker. She was really enjoying sacrament meeting, which she had not been able to do for a long while. Suddenly, the bishops looks turned into embarrassment and his hand went up in front of his eyes and he looked the other way. interested in what was going on, my mother started looking around casually to see what the Bishop was trying not to look at. Catching a glimpse of something swinging around in circles, she turned and saw at the end of the bench, the older of my two younger brothers had pulled a tampon out of her purse, opened it, and was swinging it around like a helicopter. That was not the worst of it, while his brother was playing helicopter with her tampons, my youngest brother, wanting to nurse, and unbeknownst to my mother, pulled my mother’s shirt down (it had an very stretchy elastic neck line) and had left her completely exposed to everyone on the stand.

I was once a Baptist preacher, and now I am the Elder’s Quorum Instructor and Branch Missionary.
Well, it took a little while to understand the differences in how things go, which was evident immediately.

The Branch President asked me to give the opening prayer. When it was time, I stood up and gave the prayer, then sat down. After the meeting, several people commented on enjoying my prayer, and one even said “I like your style”. I was quite confused, as all I did was ask the Spirit to be with us so we can learn what we need to learn. Sounded pretty basic to me.

Then the Branch President approached me and said “Brother Beyer, that was a good opening prayer. In the future, when you are asked to give a prayer during Sacrament, please do so from the podium with the microphone, not by talking really loud from the back row.”

My mom felt her hair clip falling just as the sacrament tray was being passed in front of her. Instinctively, she flung her hand upwards to grab the clip and hit the tray so hard it flew over her head and into the aisle behind her, spraying its contents everywhere.

Check that…What I meant was…

During a drought in Utah, we were all asked to pray for rain. An older man was offering the benediction and prayed, “We are suffering and need rain. We know from the story of Noah that Thou hast the power to bring the needed rain. (Pause.) Actually we don’t need quite that much, just a whole lot more than what we have been getting.”

Do You Want Fries With That?

Years ago, when my grandchildren were small and spent too much time at McDonald’s, they were in the chapel awaiting the start of sacrament meeting when the bishop turned on the microphone. When my grandson heard the click, he stood and ordered nuggets and fries.

I was listening to the speakers talk in Sacrament meeting when I noticed the congregation starting to chuckle. I looked to see what they were laughing at and immediately saw my two year old son swinging his shirt and pants that he took off (standing only in his diaper). We made eye contact and he bolted out to the foyer. Yeah, I didn’t come back into Sacrament meeting, I was just too embarrassed.

From a Single’s Ward…One of my friends gave a talk. She had been told that the third speaker backed out and to go ahead and add a little more time into hers. That could have gone unsaid, as she likes to wax philosophical from time to time. As she droned on (leaving the other speaker only 10 minutes), one by one, the bishop, the first counselor, the second counselor, the 2nd counselor in the stake presidency and our stake high council rep (who were visiting) all bowed their heads for their afternoon nap.

The sister speaking said that one of the ways to overcome adversity included talking to someone “who has been there before,” which included “any of the men behind me.” At that mention, all 5 of their heads popped up in unison. Everyone in the congregation was trying not to chuckle. We all saw it. The unity in their reaction was comedic genius. Definitely not a boring sacrament meeting after that. Even the high councilman struggled keeping a straight face. I’m pretty sure he recognized what the congregation was giggly about, since he was sitting in a pew behind the other 4.

One sacrament meeting there was a young kid a few rows in front of us who was playing with a toy on the edge of the pew. When he accidentally dropped it he very loudly exclaimed, “uh oh!” The kid seemed to like the sound and started to repeat it, “uh oh!, uh oh!, uh oh!” At which point small kids nearby decided to try it out. Within seconds almost all the little kids in the congregation joined in, “Uh oh!, uh oh!” The bishop was trying his best to hold in his laughter and I remember seeing one mom try to hold her hands over her two kids mouths, but they would slip away just enough to echo another “Uh oh!”

I don’t know this man

I had to go early to Church with my 9 and 7 yo’s in tow. My husband was to follow in car #2 after getting the toddler ready. She was then around two, but the SIZE of a four yo. We had great seats about half way up to the front of the chapel. Well after the meeting had started, my 6 foot 4 in. husband came parading up the aisle to join us, the 2yo sitting on the top of his shoulders with her wide sash ribbons hanging down, swaying about, puffy dress tucked up funny, diaper showing, etc. Her long curly hair was matted and knotted. She had peanut butter tracks on both cheeks, the u-shaped crust of what was left of the sandwich still in hand and being nibbled on. In her other hand was her “toy of choice” for Sacrament meeting: a four foot, hot pink, mostly inflated FLAMINGO (from a recent zoo trip), its long neck and 20 in. long legs flopping wildly about with each stride he took. I was absolutely and thoroughly mortified! They were, however completely silent. Do you think anyone noticed? 🙂