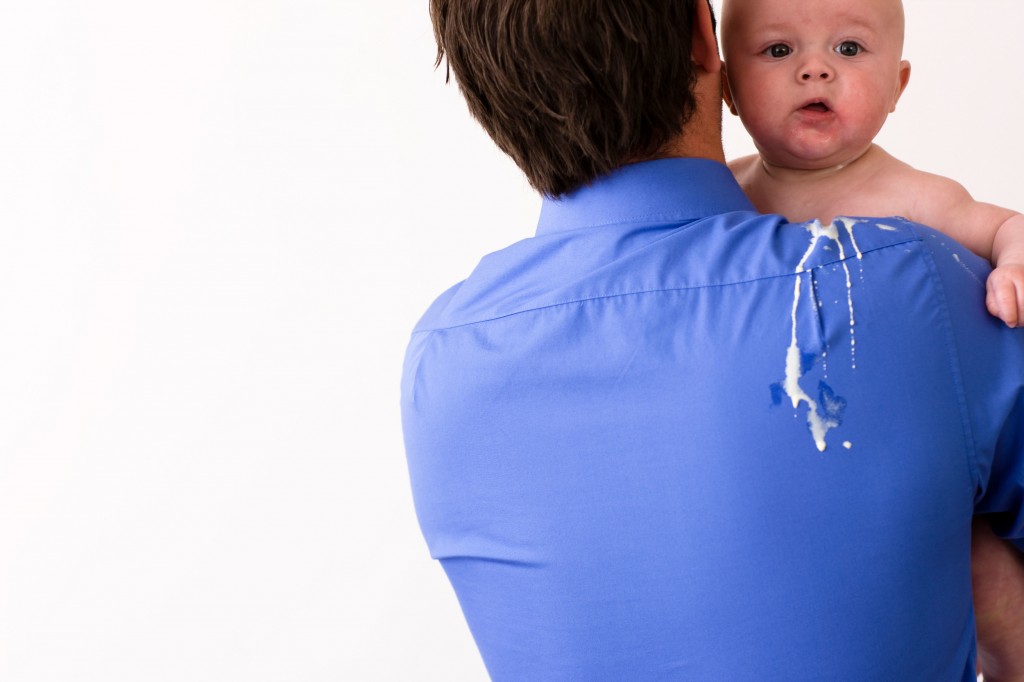 This is next level grossness that first time parents (especially fathers) are ill prepared for. It’s straight out of a horror book and it looks like something coming from a bubbling tar pit except it’s coming from a precious little newborn. Don’t worry, it’s completely normal and the dry heaving will ease up in a few minutes. Plus you can go home knowing that you will probably be a conversation piece for the nurses when they go home and tell their spouses “You should have seen the look on the face of this one guy today…”

Every parent has or will have some version of “What to Expect When You’re Expecting.” These books will basically put the fear of God into you and make you an overstrung ball of stress. These books pretty much give you every possible outcome even though 97% of them will never actually come to fruition. Relax, the vast majority of the time when your baby is coughing, it’s just a cough. It might be cancer or it could be a cough…it’s one or the other.

Ok, you can read so long as you follow it up with talking with a medical professional. Again, sites like these list pretty much every possible outcome even though most of the outcomes are unlikely. When they list 74 possible symptoms of Kawasaki Syndrome and you randomly have 4 of them, naturally you’re incline to think your child may possibly have it. It’s ok to do your own research, just make sure not to take drastic steps without talking with a medical professional.

There may not be another topic that individuals and couples are more willing to give unsolicited advice than parenting. You’re gonna get parenting advice from teenagers, neighbors and even that cute old lady who provides free samples at Costco. It’s going to happen so just deal with it. Heck, this entire post is anecdotal parenting advice from myself. Take it in stride, see what makes sense and just politely ignore the rest. I promise you that ignoring the 54,598th call from your mother-in-law will just lead to the 54,599th call.

If you are even the slightest bit troubled by blood, major loss of blood, seeing organs or body parts not normally seen…DO NOT LOOK OVER THE BLANKET! I work at a hospital and found the whole thing incredibly interesting but make no bones about it, C-Section is a major surgery for a reason. It’s amazing to me that women can still be conscious after losing 508234 liters of blood. I can’t emphasize enough how much blood is everywhere with the C-Section.

There is nothing more irritating to a wife than to have you wake up at 7 in the morning, all peppy and happy after getting 9 hours of sleep and asking her “What’s the matter? You don’t seem to be your normal self” when she has had 90 minutes of interrupted sleep during the night. Don’t be that guy. A happy marriage is a marriage in which both spouses are grumpy, ornery and can’t think due to sleep deprivation. Ok, but in all seriousness, at the very least you ought to be taking turns and allowing her some form of sleep.

Don’t spend the precious few minutes you have in between feedings, arguing who got more sleep. Husbands, don’t even start with this battle. Nothing ever good comes from this argument.

Worst Case Scenario: You are murdered (ok a bit dramatic but really if you think about it, it probably is the worst case scenario).

Best Case Scenario: You win the argument and convince your wife that you haven’t gotten as much sleep as she did and need the extra 20 minutes of sleep. So she goes and feeds and changes the diaper while you go snoring away on the bed. I promise you that you will have to pay 10x the amount of energy you gained from your 20 extra minutes of sleep the next day because in her mind “you got an extra 20 minutes of sleep” which equates to being about 75% more sleep than what your wife received the night before and therefore you have extra energy to spare to do that much more around the house.

9. Your child will develop something that sounds absolutely awful like some flesh eating bacteria from the movies.

Just prepare yourself now, your child is going to get something that sounds like it going to eat away at the flesh of every living organism in the house. I don’t know who came up with the names for the various diseases out there but clearly they didn’t have much tact. I think that is why so many diseases now have very scientific names because scientific names all sound the same but when you say Hands, Foot and Mouth disease, people just imagine in their head massive boils that are constantly rupturing on every orifice of the body.

Whether you are a stay at home mom, working mom, stay at home dad or a Democrat, people are going to judge you. Don’t allow their myopic viewpoint of your life deter you from making the best decision for you and your family. Like the old saying goes “when writing the story of your life, don’t let anyone else hold the pen.”

One Reply to “Parenting Tips That No One Talks About”