So this is our follow up from our last post. Some of the comments left had us rolling in laughter and so without any further delay, here are some of the funniest comments that were left on that post. We didn’t have enough space to include all of the hilarious comments, so if you would like to read all of them, you can find the post here. Hilarious.

Again, if you have any stories to add, feel free to add them in the comments below as those are the stories we use for these posts.

My oldest two children are just a year apart in age, so keeping them reverent in church was a challenge. I bought a book of file folder games that you could make to entertain them during Sacrament. One of them was called “Word of Wisdom Winners”. It had one side where you put things that were good for your body onto it, and a trash can on the other side for things that are bad for your body. My son was playing with it as the Sacrament was being passed. He misplaced a few of the pieces, and when It was dead silent,yelled out, “Where’s my beer and cigarettes!”

A woman finished her testimony with “I’m sorry I’m such a big boob.” Then the bishop gets up and says, don’t worry, we like big boobs, before he had a chance to realize what he just said!

I was listening to the bishop’s young son give his testimony, and during it he mentioned that his family is trying not to say the f-word so much. As soon as he stepped down, the bishop grabbed the microphone and clarified that “By the way, in our home, the f-word is ‘fart’!”

When I was a deacon the bishop’s son sitting next to me pulled out an M80 firecracker and a lighter while we were seated to pass sacrament. During the opening hymn He was passing the firecracker back and forth near the flame while laughing at us for shaking our heads no as vigorously as we could muster. Sure enough just after the song ended and right after we hear “Dear Heavenly Father” I hear the unmistakable sound of a lit fuse next to me and open my eyes just in time to see the kid lean forward and pitch the explosive device under the pews where it landed 3 rows behind us. The explosion was louder than anything I had ever heard. Men, women, and children of all ages screamed like banshees. The bishop jumped up and made a bee line for the culprit and escorted him away for punishment. When my friend grew up and became bishop of the same ward the old firecracker in sacrament story would surface every now and again and served as better punishment than the original I’m sure.

We were visiting a ward one day for a baby blessing. A little boy, about 5 years old, got up to bear his testimony. It was going well, standard 5 year old testimony until the last line… “And I am thankful that God created all the animals, because I really like to eat meat.”

I thought my non-member father was going to pass out from stifling his laughter.

When my daughter was about 7 she asked her dad to go up during testimony meeting. He wasn’t feeling up to it and when she pushed him for a why, he teased “because I’m an evil sinner” She promptly stood up and marched to the pulpit and announced that her daddy couldn’t bear his testimony today because he was an evil sinner. The entire congregation bursted into laughter and the bishop stood up and said in to the microphone “Brother Neff, I’d like to see you in my office after this meeting”!

The Heavens Being Opened

I was playing the organ in a singles ward and one of the men passing the Sacrament to me accidentally tripped and knocked over the organ bench on to the pedals…it was dead quiet and then suddenly there were these loud and long sustained notes going off, followed by short staccato notes as he walked on the pedals to lift the bench back in place. Worst part: he was a new convert and that was his first Sunday passing the Sacrament. Best part: the Bishopric member conducting was awesome and after the Sacrament was over, he made some remark about the Spirit being so strong that the Heavens opened and music poured out Ü Ü

I Hate All of You

When my brother was about 2, my mom dropped him off for nursery and came back a few min later to check on him but he wasn’t there and the teacher told my mom he never came. My mom figured he left while her back was turned and frantically started searching the church for him when she suddenly hears the speakers come on with the voice of my brother. “I hate church!!!!!!!!!! I hate all of you!!!!” He had run up to the podium, All during another wards sacrament meeting ringing throughout the pure silence screams words of hatred. During. Sacrament. 0-0. My mom was absolutely mortified and found him being dragged out of the chapel screaming and crying in that wards bishop’s arms. She made triple sure he stayed put in nursery from then on

My Mom was in town helping with our 3 kiddos under age 4. While the sacrament was being passed, she was helping our 3 year old son color quietly. At home, my wife and I usually refer to our childrens’ body parts with correct anatomical names. Our boy asks grandma to draw him a hump back whale, then a shark, a bigger shark, etc. Apparently, this wasn’t to his standards because he asks her to give the shark a penis. Slightly embarrassed, grandma reluctantly adds a penis to the shark to which my boy shouts out his disapproval: “No Grandma, a BIG PENIS! Draw him a BIG PENIS!”

When our oldest was about 2 (now 16), we gave her minty gum during sacrament meeting. Biggest mistake ever – but – we were first time parents, so what did we know?! She had stuck the wad up her nose while we thought she was just looking at books on the floor and instead she was pulling STRINGS of gum out of her nose. It was all over her face and her dress. We were dying laughing. As my husband hauled her out for clean up she was crying and yelling “It burns! It burns!”

Here’s another one: Once my little sister leaned over to my mom in sacrament meeting when she was about 4 and sighed heavily and said “Moooooommmm!! I’m sooooo hungry! When are we going to have the “snackerment”?

Okay – one more: When I was 8 months pregnant with my 5th baby, I had seriously lost my brain by then. We had 9:00 church and it was impossible for us to be on time. One day we hustled into church 10 minutes late (picture husband walking hurriedly, shushing 4 kids in tow, and pregnant waddling wife in heels hauling the giant diaper bag bringing up the rear). The bishop shot me a look and a raised eye-brow, to which I shot a look back and said in my mind “What?! We’re ALWAYS late! This is nothing new!” The last verse of the song was being sung and we slipped into our pew on the 2nd row just as the song ended. Then the prayer was said…..THE CLOSING PRAYER THAT IS!! Apparently we had forgot to “spring forward” our clocks for daylights savings time, and it was actually 10:10, not 9:10. During the prayer we stifled our giggles, ducking behind the pew, and when “Amen” was said, the whole congregations burst into laughter! We had totally made a scene shuffling in just in time to sit down for the closing prayer. It was hilarious!

This literally happened yesterday. My sister visited from out of state and was holding our new baby niece. They looked so precious. During sacrament, I subtly pulled out my phone to take a picture and the flash went off. I was mortified. 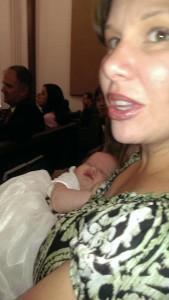 I was going to be sustained as the Primary President of our ward. I decided that my family and I should sit down in the first, front row of the chapel so that all of the children in our ward would know who I was. I was wearing a blouse and skirt. Unknown to me, my then three year
old son, who was sitting beside me, was also sitting on my skirt. When the bishop asked me to stand to be sustained, I enthusiastically jumped up. However, my skirt fell off me and stayed on the bench. So there I was standing before our entire, ward congregation in my slip.

What Time is it?

My wife and I were recently married and attending Sacrament Meeting. The final speaker was long winded and it was way past time to close the meeting when he started to bear his testimony. The “I knows” seemed to go on forever. An old man sitting behind us was obviously getting impatient, and suddenly said, in a voice loud enough to be heard several rows around, “I wonder if he KNOWS what time it is!”

A long time ago one of the speakers at my parents ward was from the high council. As soon as the brother got to the podium, my dad’s cell phone, as loud as it could go, said “message from the dark side, there is”. He was mortified.

When I was a teenager, we had a older gentleman that would get up every fast sunday to bear his testimony, which would border on lengthy discourses. My best friends dad was bishop and one fast sunday the gentleman got up and began. After a very lengthy testimony which was not likely to end any time soon. I noticed the bishop ( who was rather tall) slouch in his chair. The older gentleman keep stopping and looking at the floor and after about 5 min. he said “Bishop will you quit kicking my leg.” Needless to say the bishop was a bit red in the face.

I can’t believe I’m sharing this… When my daughter was about 2 we were walking down the hall during class. I could tell she was pooping so I quickly took her into the mother’s room. To my surprise her diaper’s side was riding up her middle and there was NO poop in her diaper. Then it hit me.. I quickly changed her and went in search of it, only to find a small group of moms huddled together trying to determine what the brown lump on the floor was!

My brother has Asperger’s syndrome, when we were little he would always take a handful of bread when it came to him. My dad told him before church to only take one that day. So when the tray got to him, my dad pretended to not be watching and shook his head and pointed at my brother when he took a huge handful….my brother put on his poker face and chucked the entire handful of bread up into the air behind his head and was like, “What? Nothing fishy here!” I’ve NEVER laughed so hard in my life!!