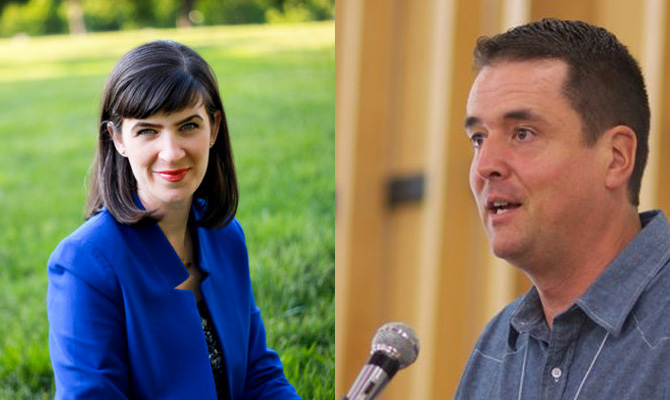 [wp_ad_camp_1]
I’ve been going back and forth with whether or not to post about the story surrounding John Dehlin, Kate Kelly and their disciplinary council. It’s a controversial topic that has split many individuals and one that every member has an opinion on. Every side has its story and every side has their justification as to the reasoning for their actions. I do not try to presume to understand their personal situations, beliefs or motivations. I also do not want to try to vilify them as individuals as I do believe that they are following their hearts and their personal convictions. It’s easy to belittle or badger individuals we do not personally know so I’m going to try to avoid that in my conversation. Also, I’m going to try to avoid belittling the local leaders involved as to why and how they are handling the current situation. Anyone who has been involved in a disciplinary council knows how difficult those situations are and how sensitive the issues involved can be especially now, in light of the fact that this situation has been made so public. I’ve posted here both the NY Times article and the church’s response to disciplinary council as well. For me personally, I almost always tend to go with the following quotes as it pertains to these types of situations.

The members of the Mormon Church are among the freest and most independent people of all the Christian denominations. They are not all united on every principle. Every man is entitled to his own opinion and his own views and his own conceptions of right and wrong so long as they do not come in conflict with the standard principles of the church. If a man assumes to deny God and to become an infidel we withdraw fellowship from him. If a man commits adultery we withdraw fellowship from him. If men steal or lie or bear false witness against their neighbors or violate the cardinal principles of the Gospel, we withdraw our fellowship. The church withdraws its fellowship from that man and he ceases to be a member of the church. But so long as a man or a woman is honest and virtuous and believes in God and has a little faith in the church organization, so long we nurture and aid that person to continue faithfully as a member of the church, though he may not believe all that is revealed.

I did not like the old man being called up for erring in doctrine. It looks too much like the Methodist, and not like the Latter-day Saints. Methodists have creeds which a man must believe or be asked out of their church. I want the liberty of thinking and believing as I please. It feels so good not to be trammeled. It does not prove that a man is not a good man because he errs in doctrine.”

We need to understand that it is ok to question ideas within the church. We don’t all think alike and we all have our various perspectives when it comes down to many of the church policies, teachings and methods of doing things. We also have a tendency within the church because of the situation we find ourselves in to categorize everything as right vs wrong when in reality they’re merely differences of opinions. However, I believe that this situation is more than just a mere difference in doctrinal belief or a doctrinal misunderstanding. I think the situation for both of these individuals goes a bit deeper than that. I highly doubt as many individuals have claimed, that this disciplinary council for John Dehlin is solely focused on his personal ideology and disagreements with the church. Here is the letter that was sent to John Dehlin concerning his disciplinary council provided by the Salt Lake Tribune. 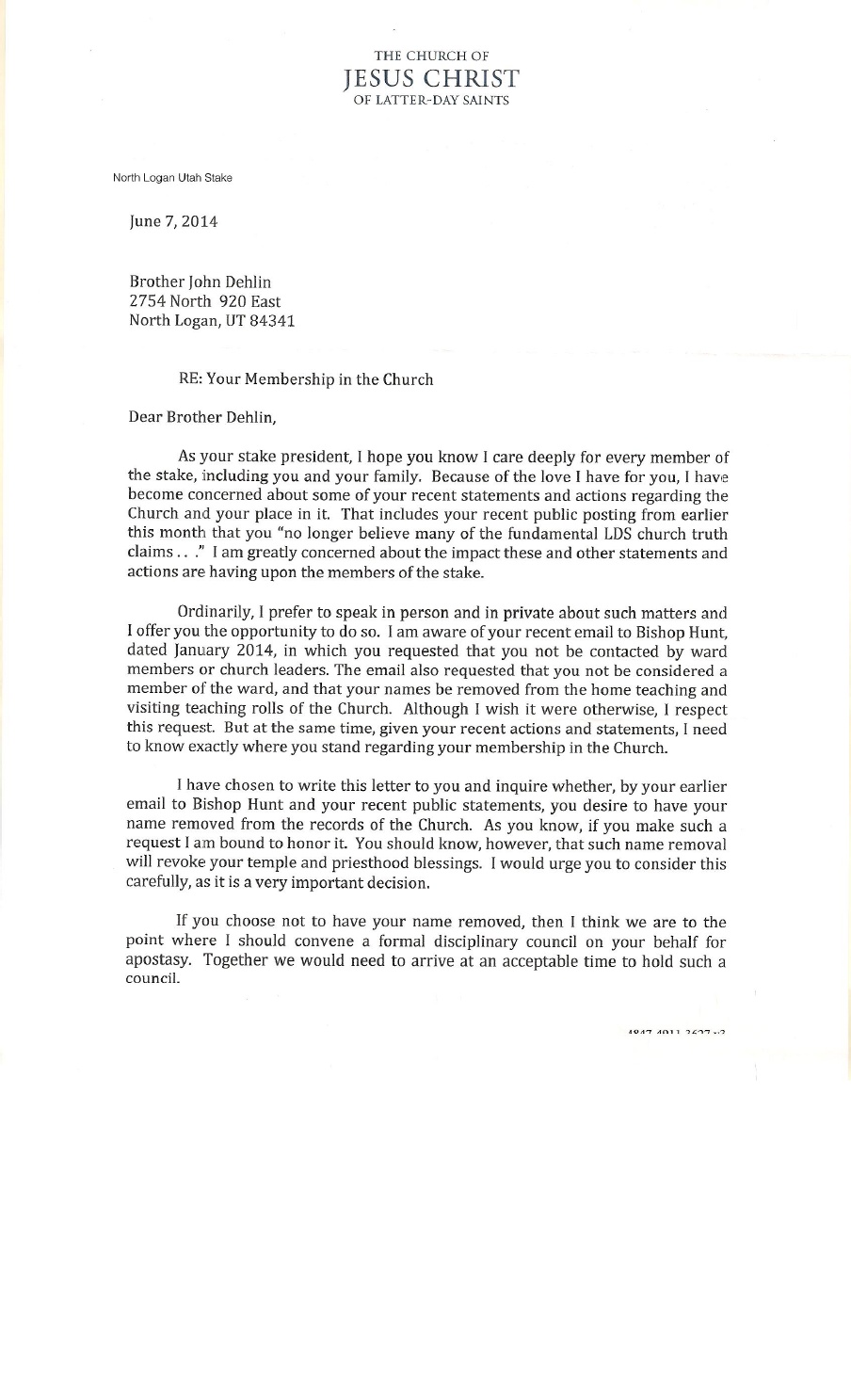 I will let everyone make their own conclusion from the letter but it seems that this issue with him goes a bit deeper than just a doctrinal misunderstanding or difference. Again, with a church as large as ours, you’re going to have differences of opinions even on some of the most fundamental issues. There is no better example of individuals disagreeing in my mind than that of President Eyring’s father Henry Eyring and the prophet Joseph Fielding Smith. I have placed a link here for those who would like to read the entirety of their exchanges and disagreements One quote from Henry Eyring as to one of their meetings concerning their disagreement:

A lively hour-long discussion [on “radioactive dating”] ensued. As so often happens, each person brought up the argument which supported his position and we parted each with much the same position he held when the discussion began. But what was much more important, the discussion proceeded on a completely friendly basis without recrimination and each matter ended there. No one was asked to conform to some preconceived position. The church is committed to the truth whatever its source and each man is expected to seek it out honestly and prayerfully. It is, of course, another matter to teach as a doctrine of the church something which is manifestly contradictory and to urge it in and out of season. The author has never felt the least constraints in investigating any matter strictly on its merits, and this close contact with President Smith bore out this happy conclusion. Since we agree on so many things, I trust we can amicably disagree on a few. I have never liked, for example, the idea that many of the horizontally lying layers with their fossils are wreckage from earlier worlds. In any case, the Lord created the world and my faith does not hinge on the detailed procedures.

In Reflections of a Scientist by Henry Eyring he made the following comment:

I can understand how we sometimes object to being labeled. Some labels we accept. For instance, I’m content with “Mormon,” “devout,” “Christian,” “chemist,” “husband,” “father,” and so forth. Sometimes, however, a label is loaded with emotional baggage far beyond its usefulness or importance. For example, “organic evolutionist” or “creationist” are labels, either one of which I would reject, for myself, at least. They simply carry too much baggage and confusion for my taste. Considering the difference in training of the members of the Church, I never cease to marvel at the degree of agreement found among believing Latter-day Saints. However, organic evolution is one topic upon which there is apt to be wide disagreement. Such a topic becomes controversial partly because it is interesting to us, but it seems to be sufficiently nonessential to our salvation that the Creator has only briefly treated it in the scriptures. If you think about it, it makes almost no difference at all to the way we should live our lives and treat one another. Still, there are those who line up on both sides as if everything depended on the outcome of this year’s ‘monkey trial.’

President Joseph Fielding Smith and Henry Eyring disagreed as to many of the details of how the Earth was created, the age the Earth and how exactly men came to be. Even though Henry Eyring disagreed with President Joseph Fielding Smith on these issues, he understood that as it pertained to their salvation, it didn’t matter. He understood and openly stated that though they had disagreements, he knew that by listening to the council of President Smith (insert President Monson or the current prophet of God here) that we would ultimately find happiness and obtain salvation.

This is why I believe the Ordain Woman movement took the wrong approach in trying to get their message across. I have no issue with women who want to have the priesthood. I don’t even have a problem if they disagree with the brethren on the church’s stance on the issue. I actually didn’t have an issue with them forming their organization to discuss an issue that was very important to them. Almost all of the revelations that have been given in modern and ancient times have come about by asking sincere, thoughtful questions to the Lord. Though women as a body cannot have the priesthood now, doesn’t mean that the Lord in His infinite wisdom won’t reveal that they can have the priesthood later. It also doesn’t mean that He will grant them the priesthood as a collective body either. That is ultimately up to Him and Him alone to decide.

It’s one thing to disagree with the brethren; it’s another thing to publically launch a crusade against them. That’s where the Ordained Women movement in my mind stepped over the line. When they decided to take their movement beyond just a doctrinal disagreement and openly rejected the brethren’s request that they stop protesting at General Conference and continued to push against them at every turn. In short, they chose to go against the Lord’s anointed. Now having said that, I do believe that some members are starting to place emotionally charged labels on these women that are unwarranted including Kate Kelly herself. I don’t know her personally but I can assume from the individuals I do know that know her, that she is a good hearted individual with amazing talents and gifts. As it pertains to their disciplinary council, I honestly don’t care as it is none of my business. It is between them and their leaders to discuss and hash that out. Could the local leaders have handled the situation with Kate Kelly a little better? Possibly but again, it’s their call to handle the situation as they deem fit.

The main reason I wanted to share this post is to show an example of how we can disagree with the brethren and yet still sustain and support them in their callings as “prophets, seers and revelators.” Hopefully understanding that ultimately, as we follow their council and teachings, that regardless of the smaller differences that we may have we will reach our ultimate goal of exaltation and living with our families again.

31 Replies to “John Dehlin, Kate Kelly and Their Disciplinary Council”