Occasionally I see posts from individuals who are facing depression and anxieties in their lives especially among some of the youth. I just wanted to provide some perspective from someone who is young enough to still remember those days where I was constantly stuck in this vicious cycle of feeling depressed but old enough to have a little bit of perspective on the issue.

*Disclaimer* I need to distinguish between clinical depression and the feeling of being depressed. Everyone feels like they are clinically depressed when they are feeling depressed but there is a huge difference between the two. For those who truly are clinically depressed the below information may be useful but you really need to seek professional help for your depression. There are also companies like 7 acres cannabis that manufacture supplements that are reported to have helped depression.

When I was younger I used to constantly run into cycles where I was ok and then I wasn’t and then I was again just to be depressed again two weeks later. It wasn’t until I received some impeccable (and very frank) advice from a friend that helped me realize a very profound truth. It was through him that I realized that one of the main reasons I was so depressed was because I spent so much of my time focusing on myself. I was so focused on myself and the things that I was lacking that it was almost impossible not to feel depressed. At the time I was the only guy out of ALL of my friends who had not been asked on a date by a girl and I was convinced that I was never going to get married. It is a bit silly looking back on those days now but at the time, I literally thought I would never get married and when you feel that way, you can only imagine how depressing life can be to someone that young with that belief. I also had serious family issues with my parents constantly fighting and going back and forth of whether or not to get divorced (they eventually did) and no one in my family supporting my decision to be active within the church.

[wp_ad_camp_1]
From my point of view I had every right to be depressed and honestly looking back I did. But that’s not the point. We all have legitimate reasons for being depressed but what do we do about it? I had no idea of what I should do so I just constantly complained about how awful my life was. That was until my friend finally showed me a way out of this cycle. What was this magical pill that finally helped me out of the almost 3 year rut that I was going through? Service.

It was through service. I received a lot of great advice and tips during that period of my life but this was the one piece of advice that helped me out the most and eventually changed my life around. 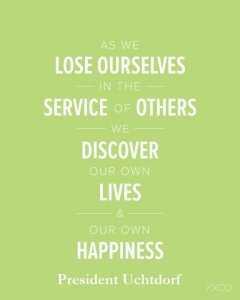 I promise you that there will always be someone in the world whose life is seemingly better than yours and someone in this world whose life is in reality, much worse than yours. It was through service I was finally able to start to see all of the blessings I had in my life rather than all of the negative aspects of it. Service brought me perspective. I saw firsthand individuals who didn’t worry about their break ups with their boyfriend, girlfriend or how their friends treated them at school or even if their parents were getting a divorce because their sole focus for that day was to survive. Their only goal was to find enough food and water just to survive another day and when they woke up tomorrow they would be fighting the same fight yet again.

This doesn’t mean that the issues I faced at the time were not big issues. They were to me and they are to everyone else who faces these trials in their lives. However, we cannot allow these issues to permanently side track us from being everything that we can be in this world. We need to remember who we are and whose we are.

When tragedy, despair, and all the evils of this world surround us and try to take that hope away, we must remember to never forget who we are and whose we are. As we remember and act like children of our Heavenly Father, we will retain the knowledge of the Plan of Salvation, and what the purpose of this life is truly about and what He wants us to accomplish in this life.

One of my favorite Disney movies that I like to quote at our firesides is the Lion King, specifically when Mufasa came to Simba to remind him of the implications of forgetting who was when he told him “You have forgotten who you are and so have forgotten me.”

As we lose sight of who we are, we inevitable forget the Father. As we lose track of this we become incorporated into the world around us until at long last we have lost our own self-worth and identity. We become like a black hole, so self-focused on ourselves and our troubles that not only do we get sucked into this cosmic vacuum, those around us often will get sucked in as well. Always remember that we are children of our Heavenly Father and that we all have a divine worth and destiny. Remember not only who you are but also whose you are.

So if you are feeling depressed today, tomorrow or 10 years from now…remember to go and do something for someone else. Get out of your bed and go and serve others who are less fortunate than you. We all need to vent and it’s ok to do so every once in a while. It’s ok to feel sadden by a break up, dealing with your parents getting a divorce or whatever trials we may be facing. These are real issues that we all face but do not let these external circumstances, dictate to you how you are going to live your life. Remember, when writing the story of your life, don’t allow anyone else to hold the pen.