There’s a quote going around the internet that goes something along the lines of “Never allow yourself to be defined by someone else’s opinion of you.”  I really love the message behind this quote but in every version of this quote that I’ve seen, it’s always missing the most important part…the “including yourself” part.

It’s true that at some point in our lives whether we are in Junior High or an executive at some hot shot new startup, we have a tendency to be defined by other’s opinions of us.  However, more often than not, the person that usually gets in our way of achieving the many goals and aspirations that we have in front of us is usually….us.

Most of the time the reason we get in our own way is that we spend too much time thinking about the things we want to accomplish in this life and not enough time actually doing those things or working towards that end.  How many times have you thought to yourself “I really should ____ *insert some actionable item to be done* but ______ *insert excuse or self-doubting statement here*.

How many times have you sat during General Conference, Sacrament Meeting or a fireside and during the meeting you are feeling the Spirit and wanted to go out and start making those changes right away just to be at home a few days later having all of that motivation just drift away?  How many times have you gotten excited to put together a budget so you can start saving within your monetary means just to be exactly where you started off a few weeks later (if not in a worse financial situation)?  What about the million times that you have told yourself that you are going to start exercising just to be back on the couch a month later? What about home/visiting teaching?  What about starting that company that you’ve always wanted to do?  What about _____ *insert almost any change in our lives that requires us to take action*? 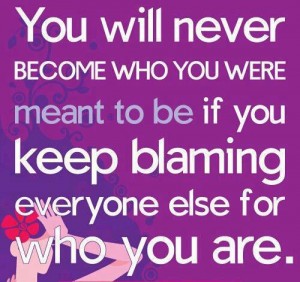 We get in our own way, much more often than any single individual ever could.  And when we fail to accomplish the changes we seek, we almost always start pointing the finger outwards to everyone but the individual who is most responsible for the lack of change, ourselves.

One of Nephi’s greatest qualities was that he was a man of action.  We all remember singing the Primary song and the part where we boldly sang “I will go, I will do the things the Lord Commands…” but we also need to remember that “Mr. Go and Do” became “Mr. Went and Did”.  Not only did he want to go and listen to the commandments of God, he went out and did those things.  He “acted” upon the promptings of the Spirit.

Another great example from Nephi was when he broke his bow.  As you recall when his bow broke, everyone, including Lehi started to murmur.  They started on this “victim” mentality of why are all of these things happening to us.  They were focused on situational circumstances that were out of there control.  They couldn’t control the fact that Nephi broke his bow or that Laman and Lemuel had not kept up the maintenance on their bows and thus they had no way of obtaining food.  They were so focused on the aspects that they had no control over and not surprisingly were very depressed by it.

Nephi on the other hand, although down as he must have been as well, focused on the actionable things that he could do to fix the situation he found himself in.  He knew that there was nothing he could do about his broken bow but instead of just complaining about the situation he found himself in, he took actionable steps to find a way out of it.  If there is anything that we can learn from Nephi, is that he was a man of action.

Whether it be about mending something that was done in the past (as would be the case with repentance) or trying to accomplish or change something in our lives for the future (such as going to the Temple more often or exercising) we just need to “go and do”.  As President Kimball used to push when he was here on the Earth, we just need to “Do it”.

Stop with the excuses, stop with the self-doubt, stop with the over analyzing of not being able to see with 100% accuracy exactly how everything is going to work out.  Are you going to make mistakes along the way?  Of course you are.  But move forward with the attitude that you’ll learn from those mistakes and learn to do whatever it is that you are doing better.  Are you going to know exactly how to use every machine in the gym when you first go?  Of course not but don’t let that stop you from going and learning along the way.  Are you going to know how to be the perfect home teacher?  Clearly not, but the only way you’ll learn how to be a better home teacher to the families that you are specifically going to is by actually going.

Don’t allow the “uncertainty” of the situation or the possibility of making mistakes prevent you from making the biggest mistake…the mistake of not doing or changing anything.  God is aware of every little step we take in not only improving our own lives but the lives of those around us regardless of how small or large those steps may appear to be.

One Reply to “Getting Out of Our Own Way”