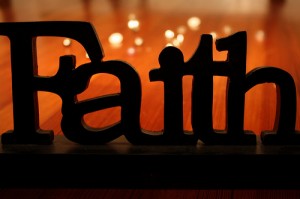 Often times we hear the phrase “faith precedes the miracle.”  We just nod our heads and usually don’t give the notion any further thought.  We also read throughout the scriptures that obedience to the law is required for blessings and so naturally the two go hand in hand.  However, as Aaron Kurr correctly pointed out we also must remember what Elder Holland taught us last year, that “surely the thing God enjoys most about being God is the thrill of being merciful, especially to those who don’t expect it and often feel they don’t deserve it”.   Sometimes we incorrectly assume that because faith was lacking, the miracle will never occur. Often times God will still choose to bless us with miracles, even when the faith necessary for it was not present.  He does this  for various reasons known only to him not least of which is His infinite love for us and understanding what we need even when we don’t.

As I have thought about this question recently, I started to think about maybe some more practical reasons as to why this notion of “faith preceding the miracle” might be true.  For those of you who have been following our blog for a while, you’ll notice that one of the topics that I post about a lot is this idea behind perception and how we perceive the world around us.  One of the reasons I believe that faith is necessary for these miracles is because without it, even when God still chooses to bless us with these miracles, we literally cannot see them. Without faith, many miracles that are all around us and those that are bestowed upon us are chalked up to coincidences, happenstance or luck. Without faith, though the miracle is still present, we do not see it or recognize it as such because we do not attribute the miracle to the rightful source, so in one sense it’s almost as if it didn’t occur.

One such example is from one of our “Smilers” who sent in their experience with a horrific car accident.  Her name is Stephanie Anne Terrell.  In August she was driving home to Tahoe from a week long vacation to see her family in Utah. About 7 1/2 hours into the drive she nodded off and ended up rolling her car 6-10 times. The man that helped her out just happened to be an off duty cop.  She ended up with nothing but a dislocated shoulder (that actually set itself while she was rolling) a cut up and bruised hand, and a pretty crazy road rash on her elbow. When she was released out of the hospital, she went to the tow yard where they took her car.  Here are some of the images of the car after the fact. 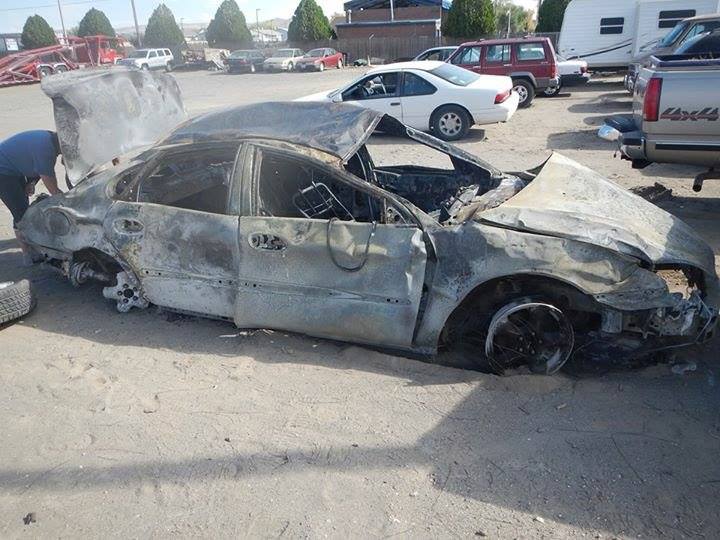 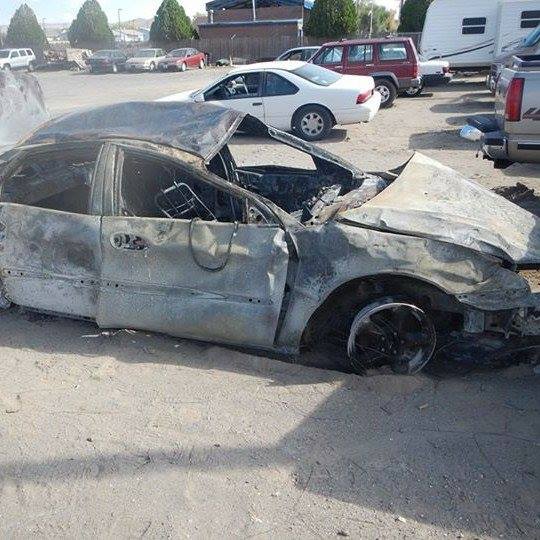 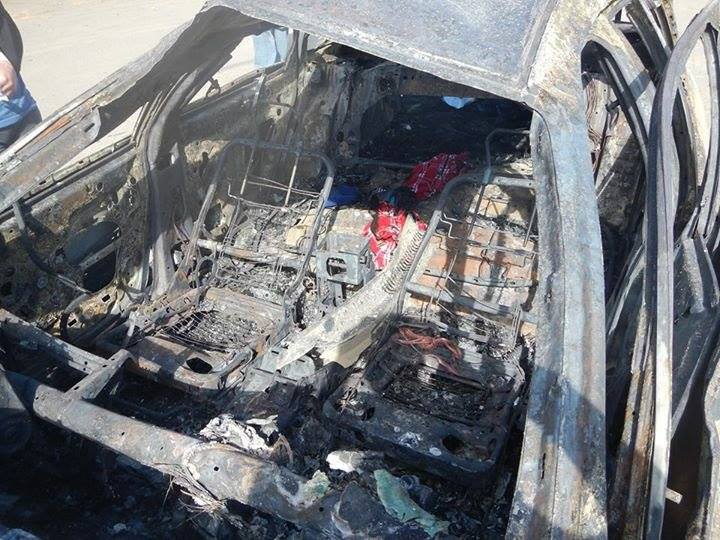 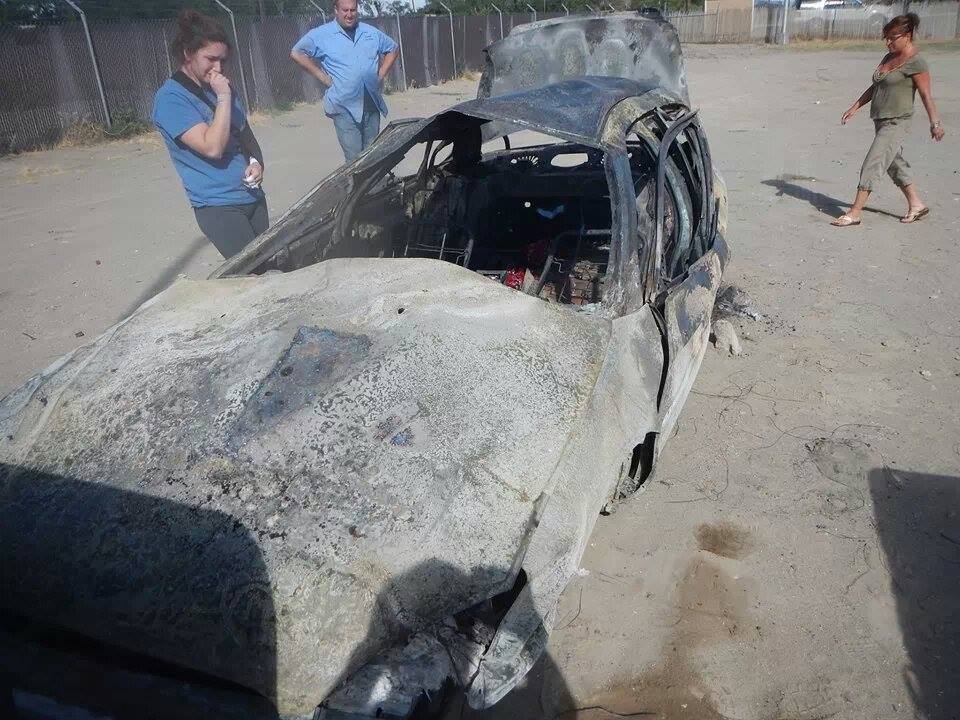 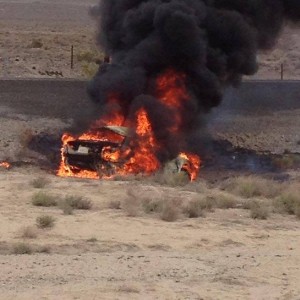 When Stephanie pried open her trunk, she shuffled through her burnt clothes to find a necklace from her great grandma. Stephanie then pulled a blanket up from the other side to find her scriptures and cried when she saw their tattered and scorched appearance.  But when she flipped them open,  she starting crying for a completely different reason. 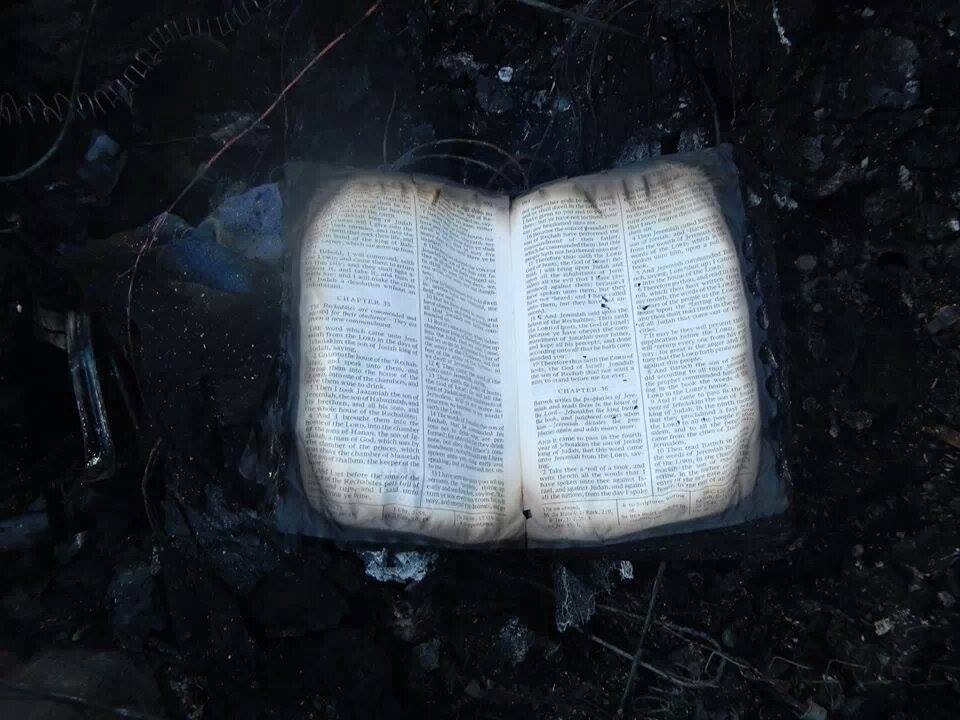 As Stephanie goes on to explain

“I feel that that is part of the reason I was blessed with this experience. And I say blessed because that’s how I feel      about what happened. My life was forever changed.  My feeling when I opened my scriptures was amazing. I remember thinking ‘holy crap the words are barely touched.’ I moved in with my nonmember aunt and uncle (my uncle being kind of atheist) about a year ago, and asked my uncle to take a picture. I could tell by his body language and the way he talked while taking the picture, that he was touched. I knew he felt the spirit, maybe just a tiny bit, but that’s something right? It was in that moment, seeing my car burnt away, my luggage burned away but my scriptures remaining (not being able to be used of course) that I knew that the church was true. People talk about being fully converted, and having that “ah hah” moment. Well, at 19(almost 20) years old I had mine. This was it. Seeing my scriptures in the state they were in, the fullness and truthfulness of the gospel became undeniable. The only way I can express my feelings is by describing it as warmth and comfort and love.

Also, being out of my car, and 5 minutes later having the man take the picture of my car on fire, sitting there watching it burn, knowing I could have been in it, just made me so thankful and feel so much love towards our Heavenly Father. And then again seeing my car afterward, being able to see that the passenger side was way crunched and my side was barely dented in at all is just astounding. I know He has his hand in all things.”

Stephanie is not the only person to survive a horrific car accident such as this.  She could have easily chalked it up to being dumb luck or some other reason of having come away from such a crash without any major injuries.  She could have chalked up the fact that her scriptures were the only item in her car that didn’t get completely burned due to dumb luck.  However, Stephanie has chosen to see the miracle through this accident.  She has chosen to see God’s hand in her life.  She sees the miracles because of the faith that she has in knowing that God still has something more for her to do in this life.  In short, she sees the miracle because she chooses to see it and that comes about through her faith in the gospel.

Even for those of us who do have the faith and believe in these miracles, many times we don’t see all of the “Tender Mercies” of the Lord that Elder Bednar so beautifully described in his General Conference talk.  This is because we don’t fully recognize them as such.  We become immune to the daily blessings of these miracles that we often forget that they are miracles at all.  The meme below describes the overall thought of the post quite well.  Sometimes we don’t believe in miracles because not only are they all around us, we ourselves are living, walking miracles. 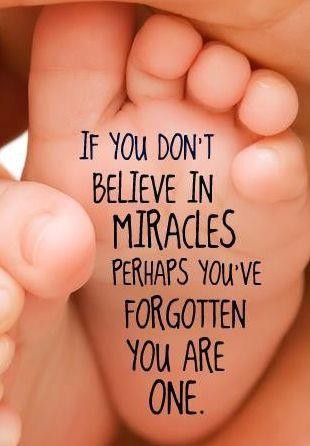 Be watchful and mindful of all of the blessings and “miracles” that God has provided for us understanding that it truly was Him who blessed us with them.  As we look to see God’s hand in all things we start to realize how much He truly does bless us with on a daily basis.  As we “count our many blessings” we start to comprehend how blessed our lives truly are and how grateful we ought to be towards our Heavenly Father because of them.